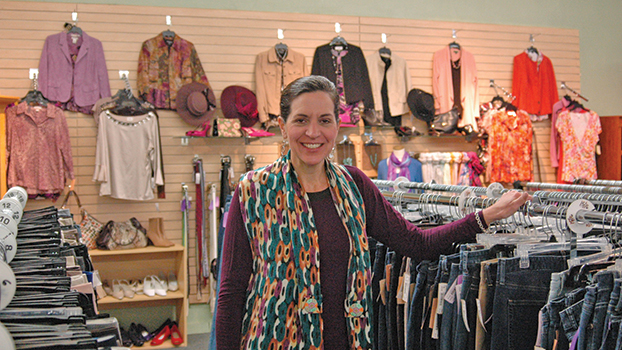 DOWAGIAC — The rain patters down on the windows of WHOkNEW? consignment shop in downtown Dowagiac just after opening Tuesday morning, while owner Kris Soenen waits behind the counter, surrounded by coats and tops of every color, waiting for her first customer of the day to walk through the door.

The day is like any other for Soenen, except that, for the first time in four years, she is only managing one store rather than two.

Soenen recently shut down for a week in order to merge her two consignment shops WHOkNEW?, which sold newborn to teen clothing and accessories, and Refine, which sold women’s clothing. She closed the doors of Refine and moved the women’s inventory into WHOkNEW?, a move that will make for a more pleasant shopping experience, Soenen said.

“It will be easier for staff and for customers,” Soenen said. “The only difference is that all our departments are now in one place.”

Soenen has owned WHOkNEW? downtown for 10 years, and opened Refine four years ago to carry exclusively women’s clothing. She said the move to merge her stores will benefit both her business and the consigners for whom she sells their clothing.

“I’ve had many consigners for both here, for the children’s and teen clothing, and at Refine, for the women’s clothes,” Soenen said. “The stores were a block and a half apart, but now they can stop in one place.”

Ultimately, Soenen said not much will change due to the merge. The only difference being that she added additional dressing rooms to WHOkNEW? and will no longer carry maternity wear, cribs and toddler beds.

“I think it will serve everyone well,” Soenen said of the change.

With the new change, Soenen said she plans to keep WHOkNEW? in downtown Dowagiac for at least another 10 years, as she loves the people and community of Dowagiac.

“The people here are good people,” she said. “If you need something, they will step in to help you.”

Further than just love of the community and the benefit to consigners, Soenen plans to keep her store alive because she believes in the mission of resale shops.

“I think resale is good for the world. We are keeping things out of landfills. By shopping resale, you are decreasing the need for new manufacturing which pumps chemicals and dyes into our environment, which are harmful for the environment,” Soenen said. “We are furthering the life of clothing by keeping them out of landfills. … It’s not just about making money and putting money back into the community. It’s also about focusing on lessening our consumption.”