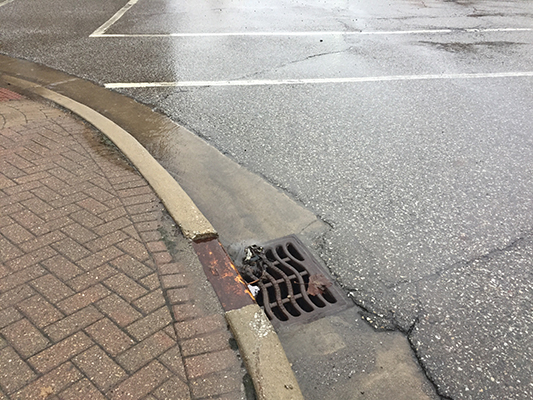 Michiana is on alert for flooding through Wednesday afternoon, according to the National Weather Service, as heavy rainfall, melting snow and runoff is expected to overflow rivers and ponds.

A flood warning for areas near the St. Joseph River is in effect from 3:19 a.m. Tuesday until 3:15 a.m. Wednesday. A flood watch has been issued until 4 p.m. Wednesday for Berrien and Cass counties as well as parts of northern Indiana. A flood warning is issued when flooding is imminent or already occurring, and a watch means that there is potential for flooding based on current forecasts.

Meteorologist Lonnie Fisher, who works for the National Weather Service’s northern Indiana branch advised residents near lakes, rivers and lowland areas to be on alert.

“If you live near any creek, stream, drainage ditch that you know overflows or causes problems … if you live in any low area, you just need to be prepared,” Fisher said.

During this period of time, officials asked that people avoid driving through flooded areas because the water may be too deep for safe passage. Additionally, children should not be permitted to play in or near flooded areas.

Fisher said it does not take much water to damage or put vehicle passengers in danger.

“The biggest message we can’t stress enough is: turn around, don’t drown,” Fisher said. “If you see water on the road, even if it looks like it is only a few inches deep, don’t attempt to cross it. It only takes 6 inches of water to pick up a vehicle.”

According to weather.gov observations made at the South Bend International Airport, over the past 24 hours, 3 inches of rain has fallen, while the temperature has risen from 38 degrees Fahrenheit to 60 degrees Fahrenheit, causing snow to melt quicker. Additional rainfall between 2 and 4 inches is expected through Wednesday morning in northern Indiana and southwest Michigan.

Fisher said the dramatic change in temperature can be attributed to cold air being pushed west, while a frontal boundary has stalled over the Great Lakes Region.

“Anyone along and to the east of that front is obviously enjoying these very balmy conditions, with temperatures in the 50s and 60s,” Fisher said. “But of course, it is coming at a price right now with just large amounts of moisture coming out of the Gulf of Mexico that are unusual for this time of year.”

In Niles, the National Weather Service has forecast that the St. Joseph River could reach a crest of 15 feet around 1 a.m. Saturday. The flood stage for the river is 11 feet. By 11 a.m. Tuesday, the river measured 11.3 feet.

Due to the rise in river water, the National Weather Service predicted that Water Street and low sections of Marmont and River streets in Niles could experience moderate flooding, as well as lowland areas near the wastewater treatment plant and Island Park.

Residents across Berrien and Cass counties are asked to remain vigilant as the rain continues to fall. Ben Anderson, the superintendent of Public Works for the Village of Cassopolis, urged any residents in the village who experience flooding near their home, community or on the road to call the central dispatch number for Cass County in non-emergency flooding situations at (269) 445-2481. The number for the Berrien County Sheriff’s Department in Niles is (269) 684-5274.

“If you see a tree down on the road or you see some water over the road, those are the types of calls that if they go into Central Dispatch my workers will be contacted and have a policy to respond within 15 minutes,” Anderson said. “We will clean up the tree, put cones around the water, or try to get the water off of the road.”

Anderson did note that within the past two to three years many of the storm drains in the area were cleaned of sediment and sand to help make sure that they run optimally.

“In general, our storm drain system handles all that water. We typically don’t get a whole lot of trouble out of it,” Anderson said. “The state roads on occasion [may experience flooding]. Their system isn’t built to handle quite so much water.”

The water then runs through the storm drains and is directed to a retention area, such as a pond or detention basin. In general, those areas are also equipped to handle large quantities of rain but, in extreme cases, can experience flooding.

One of the main retention areas for the Village of Cassopolis is Stone Lake, which did flood about five years ago to the point water overflowed into residents’ backyards. Anderson and his team are doing what they can to prepare for that situation in case it happens again.

“We are monitoring the pond levels to make sure they are holding all the water,” he said. “We’ll devise a course of action should they start getting full with no end of rain in sight.”

As weather conditions change, residents are advised to check weather.gov for updates.

NILES — Each Tuesday, a group of high school students gathers after school to discuss ways to achieve a simple... read more