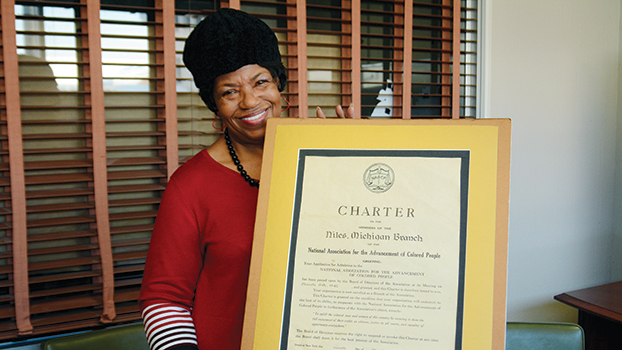 NILES — Since 1909, the NAACP organization has banded people together to address civil rights issues. Those who became part of their local chapters sought to speak out for human equality, refusing to sit idly by while the people of their country were oppressed. In Niles, the NAACP has been fueled by the same mission. This March, the NAACP Niles Branch will celebrate 76 years of operation.

President of the NAACP Saundria Wilson said it is an exciting milestone that has prompted a reflection on the past and a chance to look to the future.

Wilson is a Niles native who has served as the Niles branch president since 2000. She was the first woman to be selected for the branch’s role.

Since the NACCP Niles Branch’s inception in March 1942, the organization has been a voice for human equality by addressing local issues through advocacy and communication, as well as sought to educate members and the public on history and current concerns. Wilson said a group of Niles residents helped to found the group, when they noticed civil rights issues that needed to be addressed.

Looking back on 75 years of history, Wilson said she is proud that the NAACP was able to successfully advocate for more African Americans to serve on the school boards and in the classroom, as well as an array of other community roles.

“It is good to see someone that looks like you and validates your existence. That is in the schools and the work place, athletics,” Wilson said. “We had members of our branch who were the first black employees maybe in the banks or in the office. We don’t really think about it now, but that was some tape that had to be broken. That was especially significant in the ‘60s and ‘70s.”

Wilson said she is also proud of the way the NAACP has inspired the community, by drawing leaders across Michigan and Indiana to speak and inspire others at banquets and other social functions that the group puts on. Such speakers include U.S. Sen. Debbie Stabenow, State Rep. Dave Pagel, as well as judges, doctors, musicians and educational leaders.

“Our intent is to have the community avail the resources and expertise that we have right here in our area,” Wilson said.

Today, Wilson said the Niles NAACP branch has about 60 members, which is down from years past, which has seen upwards of 200 members involved.

Looking to the future, Wilson said she wants to see more youth get involved in the NAACP. Currently, she said there are less than a dozen members under the age of 40 who are members. Not only is this important for carrying on the life and legacy of the organization, but Wilson said the youth have the power to inspire the older generation and vice versa.

“Young people keep old people energized. We have not had an active youth branch for a long time,” Wilson said. “I hope as the branch continues, they will work on that.”

While the branch continues to advocate for human rights and the elimination of race based discrimination, Wilson said education is also a huge part of their efforts. Under her leadership, Wilson said she has worked for the past couple of years to increase voter literacy by educating people about local elections and running candidates.

“We want literacy, registration and participation,” Wilson said. “Not just for the four-year elections, because a lot of things happen in the interim that really have a bearing on our weight. We are pushing that to make sure people are registered and aware.”

Being more aware of history and politics is also something that Wilson hopes to see inspire more communicative conversations, instead of arguments that spur anger and hate, she said.

The NAACP Niles Branch meets on the third Tuesday of each month at the Niles District Library. Memberships are $30 for adults and $10 for those 20 and under. To join, those interested can contact Wilson at (269) 357-4365.