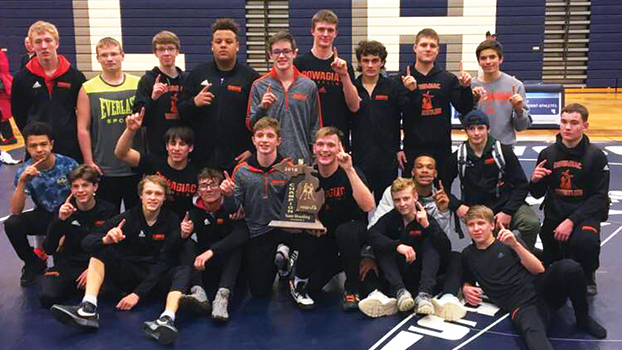 LAKE ODESSA — For the first time since 2004, the Dowagiac wrestling team is headed to the Division 3 state quarterfinals.

The Chieftains punched their ticket to Wings Stadium in Kalamazoo with a 37-28 victory over No. 7-ranked host Lake Odessa Lakewood in the Division 3 regional championship match Wednesday night.

Dowagiac (26-8) advances to the regional finals with a 52-27 win over Coloma in the opening match of the night.

The Chieftains led just 31-28 heading into the final bout of the night at 189 pounds against the Vikings.

Senior Justin Lyle pinned Luke Steverson in 2:35 to clinch the victory and propel Dowagiac into the quarterfinals at 4:30 p.m. Feb. 23.

Lakewood forfeited at 160 pounds to Lamberto Paredes and sent standout Jon Clack out at 171 pounds.

Since Clack had to report in first, Dowagiac sent out Chris Shultz instead of Lyle, who continues to wrestle up one weight class in the postseason.

The move worked to perfection as Clack pinned Chris Schultz in 19 seconds to cut the lead to 31-28 heading into the finale.

Steverson was no match for Lyle’s quickness and athletic ability.

“When we saw the weight draw we were kind of planning on that,” Dowagiac coach Colin Burandt said. “That was huge. We ended it with somebody we can always depend on.”

Burandt said that the Vikings had to forfeit at 160 due to the fact that the wrestler who would have filled that weight class missed school Wednesday.

“We kind of got lucky on that one,” he said. “We had no idea that was going to happen, but either way our game plan was going to be the same. We were going to throw someone out there against Jon Clack and try not to get pinned and see what Justin could do at 189.”

Dowagiac jumped out to a 19-9 lead on Lakewood as Caleb Murphy pinned Spencer Shattuck at 215, Tyler Huston pinned Kaiden Villanueva at 103, Jessie Edge decisioned Jordon Mcillwain at 119, Kody Walker decisioned Cole Jackson at 125 and a major decision victory by Alex McIntosh at 130.

Senior Gage Williams got Dowagiac back in the win column as he outlasted Lance Childs 13-11 to give the Chieftains a 25-19 lead.

Despite having a young squad, Burandt’s team did not flinch. It stuck to its plan and it worked to perfection.

“Absolutely,” Burandt answered when asked if putting together a tougher schedule paid off Wednesday night. “I do not think we were scared. We went out there and put it to them. I think we had the lead the entire match. It was awesome.”

Dowagiac must now play the waiting game as the Michigan High School Athletic Association will seed the top teams and release the quarterfinal pairs at 6 p.m. Sunday.

Burandt is no stranger to the state tournament, having wrestled in them for Niles. He says his team will continue to do what it has all season in preparation for the quarterfinals.

“It will be business as usual,” he said. “Just because it is the state tournament does not make it any different than our first tournament of the year. We have to show up and wrestle. It does not matter who we wrestle. I assume we will get a decent seed, but no matter who we get, we have to go out there and leave it all on the mat and see what happens.”

The winner of the state quarterfinal match will advance to the Division 3 semifinals at Wing Stadium at noon Feb. 24. The championship match will be held at 3:30 p.m. Feb. 24.

KALAMAZOO — Van Johnson of Dowagiac, Bill Hammer of Allegan and Roger Cornelius of Gull Lake where honored by the... read more