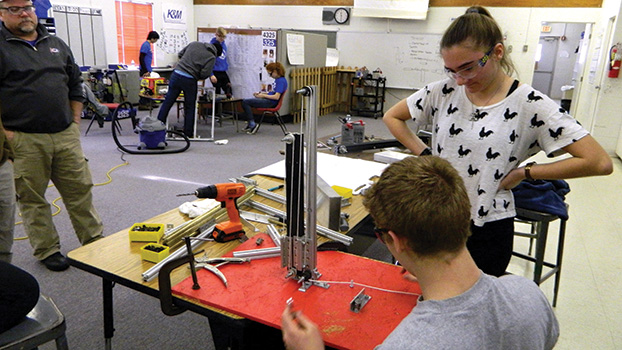 CASSOPOLIS — Area high school robotics teams are gearing up for district competitions. Currently, they are in the thick of building their robots and putting together a strategy for this year’s video game-themed challenge.

The Edwardsburg Iron Giants and the Cassopolis RoboRangers have high hopes this year after they both made it to the state competition last year, with Cassopolis going on to the world competition in St. Louis.

“We have big goals because last year we qualified for the world competition, so we’re really hoping that we can do that again this year,” said Amelia Ayers, a senior captain on the robotics team at Cassopolis. “We want to do well at both of our regional events, and then hopefully qualify for state and then worlds.”

The teams have been working since the first week of January when they learned about the “Power Up” theme for the competition, which borrows from classic 8-bit video games such as Super Mario Brothers. The competition is run by FIRST, a worldwide organization that puts on student robotic competitions every year.

The next important date this season is Feb. 20, when teams must stop building their robots. At that point, robots will be placed in a bag and are not to be opened until the start of competition. Teams are not even allowed to practice with them.

“On Feb. 20 at 11:59 p.m., we have to bag our robot — put it in a plastic bag and seal it up,” said Michael Dimino, the robotics coach at Edwardsburg High School. “I have to sign on the tag saying that we are not going to open it up until competition.”

In preparation for the stop-build date, the teams are working feverishly. The Iron Giants meet from 5 to 8 p.m. every Monday through Thursday, after school on Fridays, from 8 a.m. to 8 p.m. on Saturdays and still finds time to practice at the local American Legion on Sundays. The RoboRangers are working a comparable amount of time.

At this stage, there is obviously a large focus on building and designing the robot, but leaders say there is actually so much more that goes into a successful robotics team.

“We try to run the team like a business, so we have a group of students that do fundraising, accounting, marketing and build a website,” said Jessica Ayers, the robotics coach at Ross Beatty High School. “Currently, we are in the middle of trying to get more sponsors. After last year, our funds are a little down because we went to the world championship in St. Louis, and that took a hit on our budget.”

The first competition for both schools will be at St. Joseph High School from March 8-10 and will feature other area schools such as St. Joseph, Berrien Springs and Lakeshore. After that, both teams will go on to the second competition at East Kentwood High School on March 29-31.  How each team does at both contests will determine if they go on to state.

Given the stiff competition in the state of Michigan for robotics, it will not be easy for either team to have success again this year. According to Dimino, Michigan hosts one of the largest and most competitive state robotics competitions and is one of the national leaders.

“Considering Michigan’s history with everything that we’ve done progressing this country along technologically and industrially, it makes a ton of sense that we’re leading the way [in robotics],” he said. “That’s part of who we are as residents of this state.”