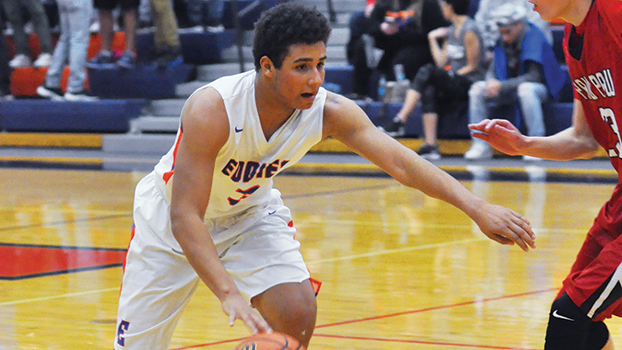 Tre Harvey scored 12 points to help lead Edwardsburg to a 66-44 rout of Berrien Springs in a makeup game Feb.7. The Eddies have one four of their last seven games and head to Vicksburg Friday night hoping to continue their winning ways. (Leader photo/File)

EDWARDSBURG — The Edwardsburg boys basketball team continued its upward trend in 2018 with a 66-44 rout of visiting Berrien Springs in a non-conference contest Feb. 7.

The Eddies (4-11) have won all four games since the beginning of the new year after dropping their first eight contests.

Edwardsburg is 4-3 in its last seven games and is looking to continue that trend at Vicksburg Friday night as it takes on the Bulldogs in a Wolverine Conference South Division contest.

The Eddies defeated Vicksburg 49-45 for its first victory of the season on Jan. 19.

Edwardsburg exploded out of the gates against the Shamrocks, in a makeup game from Jan. 4.

The Eddies scored 26 points in the opening quarter to take a 10-point lead into the second.

Leading 26-16, Edwardsburg outscored the Bulldogs 15-8 in the second quarter to up its advantage of 41-24 at halftime.

The Eddies did not let up in the second half, scoring 16 points in the third quarter to take a commanding 57-29 advantage into the final eight minutes of play.

The Eddies connected on seven 3-pointers against the Shamrocks, including two each by Harvey, Nelson and Gaideski.

Berrien Springs was led by Sam Spaulding and Garret Jones, both of whom scored nine points.

Following its game against Vicksburg Friday night, Edwardsburg will Mishawaka Marian in a non-conference game scheduled for Feb. 20.