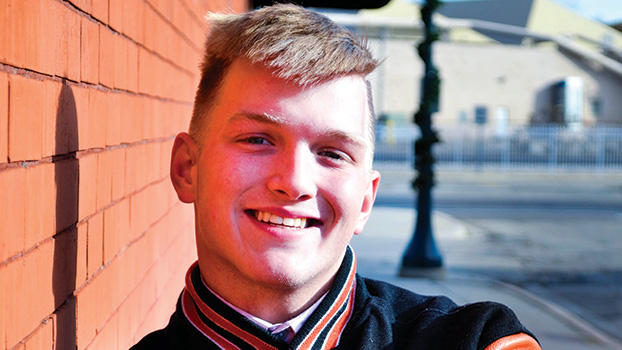 Lyle, who joins Craig Zebell (2012) as winners of the scholarship presented through the MHSAA and Farm Bureau Insurance, was one of eight student-athletes to receive the honor in Class B, including fellow Wolverine Conference seniors Izabella Marie Taylor of Three Rivers and Anthony Reo of Paw Paw.

“It is an honor,” Lyle said. “When I got the news, I was ecstatic. It is a feeling that I cannot really describe.”

Lyle is a three-sport athlete at Dowagiac. He has played two years of varsity football, wrestled all four years of high school and participated in track for three years.

He served as a captain for the Chieftain football team and is currently captain on the Dowagiac wrestling team, which will compete in the Division 3 regional tournament in Lake Odessa Wednesday.

On the academic side, Lyle has participated in four years of student government and three years of student senate. He has served as class president all four years. He is serving as National Honor Society chapter president and president of Rotary Interact Club. Lyle is also serving his second term as treasurer of the school’s Chieftain Heart sportsmanship club.

He volunteers with his church and has taught three years of Sunday school. Lyle has earned the Presidential Bronze Volunteer Service Award and Daughters of the American Revolution scholarship.

Lyle said the process of applying for the scholarship, which was done last fall, included listing all of his athletic and academic accomplishments.

“I had to write an essay about the meaning of sportsmanship and what that is important in high school athletics,” he said.

“Accountability is an exceptional virtue to those who display sportsmanship,” he said in his essay. “Displaying sportsmanship teaches young athletes that every action they make will directly affect themselves and their peers. Accepting the responsibility for the mistakes one makes can be much tougher than accepting the admiration for the successes achieved; however, facing the mistakes often reveals the athlete’s true character.”

Lyle said he originally filled out the application without any expectations.

“At first, I thought it was a shot in the dark,” he said. “But I figured I would fill it out just in case because you have to take advantage of every scholarship that crosses your path. I was like if I don’t get it I don’t get it. So, when I became a semifinalist it was like crazy. So, I was so excited because I thought maybe I could get this.”

He will attend Central Michigan University and study broadcasting and cinematic arts.

The Scholar-Athlete Award is now in its 29th year. The $1,000 college scholarship is awarded to 32 individuals, 30 of which come from classes A, B, C and D with two at-large selections from any of the four classes.

Students applying for the Scholar-Athlete Award must be carrying at least a 3.5 (on a 4.0 scale) grade-point average and have previously won a letter in a varsity sport in which the Michigan High School Athletic Association sponsors a postseason tournament. Other requirements for the applicants were to show active participation in other school and community activities and produce an essay on the importance of sportsmanship in educational athletics.

The Student-Athlete Award winners will be honored during halftime of the Class B boys basketball state finals game at the Breslin Center on the campus of Michigan State University March 24.

NILES — In a preview of the opening round of the Class B girls district basketball tournament Feb. 26, Niles fended... read more