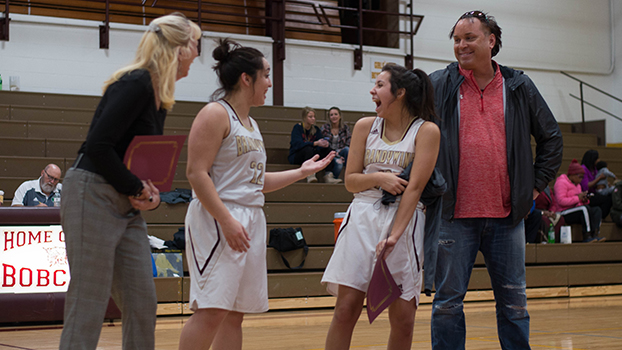 And according to head coach Josh Hood, whose team ranks ninth in the state in the latest Class C Associated Press poll, there’s still a lot of work his team has to do.

In a make-up BCS Athletic Conference Red Division game Monday night against Berrien Springs, the Bobcats came out on top, 49-40, but Hood said it was clear his team was still in snow-day mode.

“You could tell we had minimal practices the last three days,” he said. “There were a lot of mistakes and unless we turn things around this week, spring sports will be here quick for these ladies.”

The Shamrocks never led, but their offensive game was spot on. Hood brought attention to his team several times that the defense was slacking.

“We have to be tougher on D,” Hood said. “We cannot allow teams to have possession of the ball as long as Berrien Springs did. At times, it felt they (Berrien Springs) stayed on their end of the court forever. We have to attack the ball better.”

Top scorers for the Bobcats were Zakiyyah Abdullah with 21 and Nicole Sachman with 19.

The evening also featured the celebration of Senior Night, which recognized Alexia and Melanie Martinez. The only two seniors on the Bobcat squad took half court after the game to honor two teachers who impacted their high school experiences.

Hood spoke about the pair and their complete dedication on and off the court.

“Those two girls are phenomenal kids,” he said. “They are exactly what student athletes should reflect. With all of the stresses they carry — from academics to jobs to being multi-sport athletes — they handle everything with flying colors. They have a very supportive family and, as a coach, they are the type of person you want in your program. I am very lucky to have had their leadership and guidance.”

When asked about their experience with the basketball program, both girls agreed on one thing — Hood runs a tough ship.

“I wasn’t going to play my last year, but coach insisted I did and I’m very happy I chose to do so,” Alexia said. “Basketball is tough at Brandywine. We practice harder than anyone around. But the team is like a second family to me and they make all the hard things a little bit easier. I have a lot of love and respect for my teammates.”

Melanie was part of the Final Four team, and takes that memory, along with many others, off the court with her. She said the highlight of her career was nailing a 3-point shot at the buzzer. As for future Bobcats?

“Embrace the chaos on the court,” she said.

Jordan Abrams and Kyle Barnett scored 17 and 16 points respectively as the Bobcats improved to 10-6 on the season and 5-3 in the BCS Red Division.

Brandywine got off to a quick start as it poured in 18 first-quarter points en route to a 33-23 halftime lead.

The Bobcats also got eight points each from Shane Brown and Jaden Croom.

Berrien Springs was led by Sam Spaulding’s 16 points. He was the lone Shamrock to reach double figures.