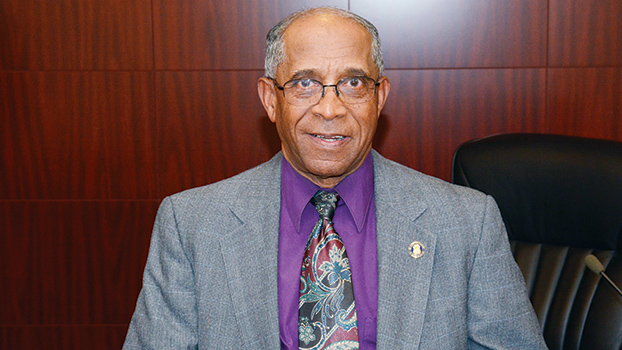 Heading down the right road

CASSOPOLIS — There are many great leaders across Berrien and Cass counties who work tirelessly to make their communities a better place. In honor of Black History Month, Leader Publications will to shine a spotlight on some of those leaders who have blazed a trail for others and continue to inspire residents to give back in their own ways. The first in our series is former Cassopolis police chief Frank Williams, who helped to fight crime in Cass County during his 42-year tenure. Here is his story.

Frank Williams has always been a positive person, because he believes that being a negative person will get you nowhere in life.

But as a young child, Williams could have chosen a different path.

At the age of 8, his mother Mildred died after giving birth to his half-brother, Lyle Peterson.

Lyle drowned when he was 5 years old. Frank’s father, Frank Sr., would not be a part of his life until years later when he was a teenager.

Faced with such tragedies, Williams decided that it would be better to be a positive person instead of letting the negativity in his life overwhelm him.

He was raised by his maternal grandparents, Arthur and Lola Dungey, brought to the Village of Cassopolis where he would graduate from high school before enlisting in the United States Air Force, where he served for eight years.

Looking back, Williams expressed gratitude to his grandparents for starting him down a successful path.

“If it was not for my grandparents I know I would not be here today and be as successful as I have been in my lifetime.” Williams said. “I owe so much to them for putting me under their wing and sacrificing a lot for me. So, if they were here today I would be kissing them every day because they made my life.”

During his days in the Air Force, Williams was part of the military police. He would use the G.I. bill to earn two college degrees, and, among other jobs, worked for the Cass County Sheriff’s Office before becoming the chief in Cassopolis where he spent 42 years on the job.

“Coming to Cass was just one of those deals. God is wonderful. We landed here. I graduated from here. I went into the service. I came back here. Believe it or not I sold cars over in Dowagiac at Dreisbach for a few months before I got a call from Sheriff (Jim) Northrop asking me if I would be interested in a job.

“They took my application, did some background checking and they called and said I was hired. From there I worked at the bank (First Commercial) for 13 months and then on Sept. 27, 1974, I became the chief of Cassopolis.”

One would think that Williams would have been an angry young man having dealt with such tragedy as such an early age.

He said there was never any anger.

“At that age when things occur — and you really find out in life at my age how things really were and how I came about being with my grandparents — there was no time for anger,” he said. “What would anger bring me? I was fortunate to be where I was at. There could not be any anger.”

Williams never really questioned why these things happened to him. He decided that it was more important to move forward with his life.

“There was no point in asking questions because I would not have known if I was getting the right answers,” he said, “The only person who would have been able to answer those questions were my mother and my father and they were not available. My grandparents could only have said that they separated and my mother did not know what she was going to do.

“My mother did not know what she was going to do and felt that she could not properly take care of me so my grandparents took me and my cousin (Dorothy) in fact. The brought us with them.”

Williams has used those experiences throughout the years.

“I guess my experiences really have grown from how my grandparents raised me,” he said. “That is how I raised my family. Not to brag, but that is probably one reason why I have been blessed to have my boys follow in my footsteps. My grandfather was firm, but he was fair. I had a curfew and I had things I had to do. They brought me up the old-fashioned way. From that I just made stepping stones in my life.

“I will tell you. I do not deal with negatives. Negatives do not get you anywhere. That is why I am a positive person. I do not hang around negative people. I leave. Being negative just pulls you down. You want something that is going to keep you up high and positive. It is just like a car. You cannot start a car on two negatives. You have to have a positive to start that car and that is me.”

Williams, who has now joined the Cassopolis Village Council as a trustee and continues to serve the community, has been married to his wife Sukey for more than 45 years.

His two sons, Frank Williams II and Andy Williams are both members of the Michigan State Police.