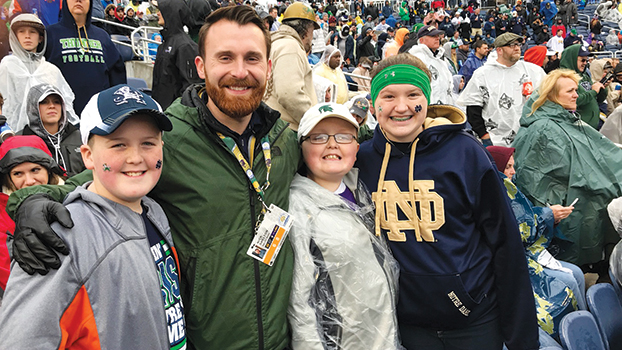 NILES — In most respects, 11-year-old Colton Hubbard is like other children his age growing up in Niles.

The fifth-grade Brandywine Elementary student loves playing with Legos and football with his classmates and friends. His favorite subject is math, and he aces the daily lessons.

Colton’s bravery probably far surpasses most his age, however.

Colton was 7 years old when he went to a routine eye doctor’s appointment, and the optometrist discovered some swelling around an optic nerve. Colton was taken to the doctor that day, where an MRI revealed a nearly baseball-sized tumor growing in his brain.

Colton was taken by ambulance to Riley’s Children’s Hospital, and the benign mass was removed with minor complications. A permanent shunt was placed in his brain to help regulate the movement of spinal fluid and pressure in his head.

That incident began an ongoing battle for Colton and his family.

About a year and a half ago, doctors discovered a new tumor mass in Colton’s head, this time near his pituitary gland. Late last year, during an MRI at the Riley’s Children’s Hospital, results showed tumors in five to six locations that are growing throughout Colton’s spine from his neck to his tail bone. Pathology results revealed that the tumors were the same as the one found in his brain.

His family is now searching for answers and potential treatment for the rare choroid plexus papilloma tumors. Colton’s father, Andrew Hubbard, said the family is now anticipating some large costs ahead with the testing, travel and an undecided treatment plan.

Andrew’s uncle, Mike Shelton — one of the owners of Shelton’s Farm Market — proposed a way to help.

On Wednesday, customers who patronize Shelton’s Farm Market can pick up Colton Cure Coupons, which will allocate 10 percent of their purchase to Colton and his family. Those who use the coupon will be entered to win a $200 meat and produce shopping spree.

The coupon can be found on the Shelton’s Farm Market Facebook page.

Colton said seeing the community rally around him at this time has been comforting.

“I just think that I am really grateful for what they are doing,” Colton said via phone from Brandywine Elementary Thursday.

Despite being poked and prodded and enduring frequent doctor’s appointments, Andrew said his son has been an inspiration to all who know him.

“He is such a trooper,” Andrew said. “He is very open about sharing what he is going through with people.”

After a recent MRI, Colton was eager to share what his tumors looked like with his schoolmates, and he brought photographs for a class presentation.

“I got a chuckle out of it. It made a few of the girls sick to their stomach,” Andrew said. “But the boys were OK with it.”

Because of the rarity of his condition, Colton was asked if he would like to be part of a medical research study that could one day help children with the same tumors. The study means getting poked a few more times, including blood draws and other tests. Despite that, Colton was happy to be part of the study, Andrew said.

“They were perfectly clear with him that he was not going to get money from the research and probably more than likely [the testing] would not help him, but could help others,” Andrew said. “He was all for it. That speaks to what kind of kid he is.”

Fortunately, Andrew said the slow-growing tumors have not had a huge effect on Colton’s ability to attend school or be a normal child, outside of the weekly doctor’s appointments. The first tumor caused some damage, which has impacted some of Colton’s coordination, but he still loves going to school, Andrew said.

“He’s a very intelligent kid, and this has not had an impact on his education,” Andrew said.

But if the family does not find treatment soon, the tumors in his spine could grow and wrap themselves around nerve endings, which could cause damage in the future, including issues with his organs, and numbness and pain in his limbs.

“Right now, the doctors are pretty baffled by what is going on,” Andrew said. “They have some tentative plans put together to attack it, but we are currently getting second opinions from St. Jude’s Hospital and Northwestern University Hospital.”

Andrew said he hopes there is a way to remove the tumors or at least stop the growth. The family is expecting to determine a treatment with doctors in the next couple of weeks, pending results from a genetic test.

Andrew said the family is fortunate to have good health insurance, which has covered a large amount of the medical cost. But the most recent round of testing has raised some financial concerns about covering travel, copay and even some testing costs.

Both Andrew and his wife have also missed a fair amount of work in order to make it to doctor’s appointments. Andrew is a superintendent for the Hartford Public Schools district, and his wife is a nurse at Memorial Hospital. They also have two other children.

Andrew said he is proud to live in a community that cares for its residents.

“It is nice being part of a small community,” Andrew said. “That kind of Brandywine memo has been buzzing around … they stick together and help each other out. This is a fine example of that.”

BUCHANAN — It was nearly a picture-perfect night for the Dowagiac wrestling team as they captured their first district championship... read more