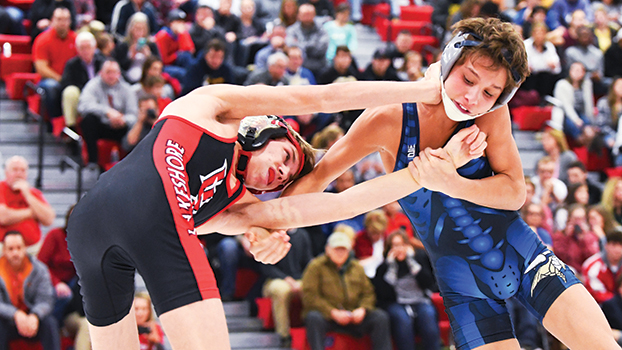 STEVENSVILLE — Seven days earlier, the Niles wrestling team learned the importance of staying off their backs in a 32-31 loss to Lakeshore on criteria during its SMAC West Division showdown.

Apparently, that lesson was not taken to heart, as the Vikings lost to the Lancers 34-30 in the Division 2 district championship match in Stevensville Wednesday night.

“You can’t give up the bonus points. You just can’t get pinned,” Niles coach Todd Hesson said. “We talk about that all the time. We gave (Lakeshore) too many bonus points.”

Lakeshore (20-1) picked up three pins, a disqualification for stalling and a major decision against the Vikings, who have now lost to the Lancers in the district championship match two of the last three years after winning four straight from 2012 to 2015.

Niles (18-3) also had three pins, but no other bonus points against the Lancers, which turned out to be the difference in the match.

Just as it did in the SMAC West title match, Wednesday’s district final started at the 171-pound weight class.

Dayton Smith and Dawson Bruckner won back-to-back decisions to stake the Vikings to an early 6-0 lead.

However, the first of the three Lakeshore pins came at 215 when Zeke Rohl beat Kenny Krempetz to square the match at 6-6.

Tyler Hill won by stalling disqualification at 285 and Riley Bettich got a pin at 103 as the Lancers suddenly had an 18-6 advantage on the Vikings.

Niles would respond by winning the next three weight classes, two by pin, to take a 21-18 lead.

Jamison Zimmerman decisioned Bailey DeLaTorre at 112, Ryan Franco pinned Jon Gelesko at 119 and his brother, Austin Franco, pinned Austin Whitman to swing the momentum back in favor for the Vikings.

Niles and Lakeshore would split the next four weight classes leaving the Lancers with a 31-30 lead heading into the final bout of the night at 160 pounds.

Lakeshore’s Cody Carlisle held the match in his hands for a second straight week, this time facing Davin Simpson.

Carlisle got the job done as he defeated Simpson 3-1.

Hesson was not pleased with the disqualification at heavyweight, along with his team getting pinned three times.

“That disqualification at heavyweight was big,” he said. “I have never seen a guy get called for stalling three times that fast in one period.”

The Vikings eliminated Edwardsburg 40-18 in a match that took well over an hour to complete.

Edwardsburg coach Jesse Becraft knows that bigger and better things are ahead of his squad.

“We put 10 freshmen and sophomores on the mat tonight,” he said. “I’m not unhappy with our effort. These guys are only going to get better.”