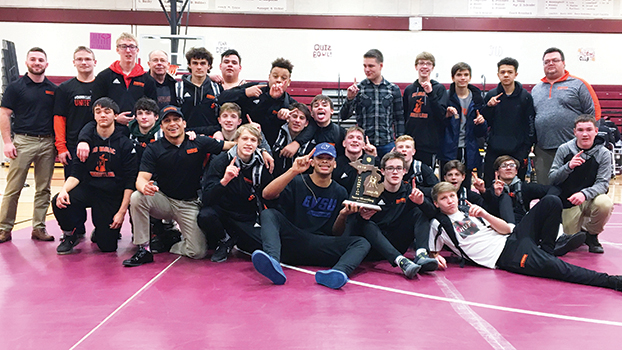 BUCHANAN — It was nearly a picture-perfect night for the Dowagiac wrestling team as they captured their first district championship since 2015 at Buchanan High School Wednesday night.

“It’s just business as usual,” Dowagiac coach Colin Burandt said following the district championship. “We just go do what we can do and if we have the opportunity to advance to the regional championship we’ll take a look at that and wrestle to the best of our ability.”

The Chieftains will face winner of the Berrien Springs district at Lake Odessa-Lakewood High School Wednesday.

Dowagiac (24-8) never trailed all night in either dual.

The momentum picked up in the championship against Constantine with a solid victory at 130 pounds when Chieftain junior Jesse Edge upset returning regional qualifier Jaxom Alwine 10-8. Edge held a convincing 9-2 lead into the first three minutes of the bout, but then Alwine was able to make a comeback into the third period.

Edge’s win, along with other close matches throughout the finals, put the Chieftains over the hump to secure the district title after the 160-pound match.

Brandywine’s (12-12) season came to end as the holes in the Bobcats’ lineup, as well as the youth of the team showed, as it was defeated by eventual district champions.

Brandywine had no response from the start of the dual as it was taken down at will in essentially every match.

This was Brandywine’s first time competing in a Division 3 district since 1997. The previous 21 years the Bobcats have competed in Division 4.

“We just couldn’t get anything going tonight,” veteran Brandywine coach Rex Pomranka said. “It’s been a different year coming in with mostly freshmen and sophomores on the roster. Next year we’ll all be a year older and with the freshmen coming in you never know what you’re going to get, but it’s been a rough year with injuries and academics. We’ll be back though. Starting Monday, we start working on next year.”

Brandywine is graduating only one senior from its team, Corbin Eckenberger.

Buchanan’s (12-10) wrestling season also came to an end as it was defeated by Constantine 43-18, but the matches the Bucks had showed they were resilient.

Five of their first six bouts went all three periods, but unfortunately ended with close wins by the Falcons.

“The biggest thing for our young guys is are they doing what we are teaching them,” Bucks second-year head coach Andy Riggs said. “Those kinds of things will get us to the next level and when we see that from our freshmen and our sophomores and they’re being effective, then I know we are doing our job right. That gives us something to build on for the future. Our guys stayed off their backs and it kept us in this dual when it could have got out of hand really quickly and I‘ll take that effort any day.”

Riggs also commended his team the way how the Buchanan season ended.

“When we got our numbers (wrestlers) at the beginning of the season I was shocked because they were low,” he said. “The thought was maybe just focus on the individual efforts, but this team worked hard every single day. They did what we asked of them and nobody gave up. To finish second in the league (BCS Conference) and go toe-to-toe with a team like Constantine, I’m really happy with our team.”

All four teams will be in action Saturday at Constantine High School for the Division 3 individual wrestling district tournament.

STEVENSVILLE — Seven days earlier, the Niles wrestling team learned the importance of staying off their backs in a 32-31... read more