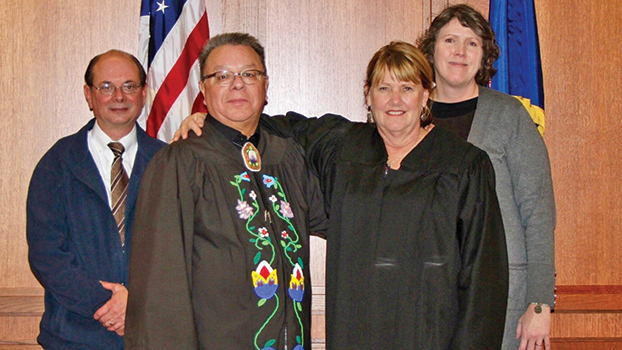 DOWAGIAC — Cass County Courts and the Pokagon Band of Potawatomi Indians are embarking on a new collaboration.

“They don’t have the legal mechanism to handle the child support like we do, because we receive federal dollars under Title IV-D of the Social Security Act,” said Chief Judge Susan Dobrich of Cass County Court.

The collaboration was spurred by the tribe’s recent adoption of a divorce code, which it has the authority to enforce, but may lack the tools necessary to enforce child support payments, said Judge Michael Petoskey of Pokagon Band of Potawatomi Indians and the Match-E-Be-Nash-She-Wish Band of Pottawatomi Indians.

“When tribal courts started, we had nothing. We’ve had to build everything from the ground up, including the divorce code,” Petoskey said. “This collaboration is helpful to us, because [Cass County] already had the tools and procedures in place.”

Both Dobrich and Petoskey said they were in full support of the collaboration, saying that they believe it will benefit the children living within Cass County.

“This will benefit our families, and we want all our families to be taken care of, whether they are tribal or not,” Dobrich said. “Child support is really important and clearly beneficial, if they are native kids, to have a mechanism to ensure they receive child support.”

The new collaboration is just one in a series of success stories between state courts and tribal courts. Already, the Pokagon Band of Potawatomi Indians carries out state child support orders and has collected more than $3 million in child support payments in the last 10 years for Michigan alone.

Dobrich said she is happy to work with the tribal court on the child support collaboration and any other collaborations that may come from it, saying that she respects tribal courts and wants to maintain a good working relationship with them.

“Judge Petoskey and I have been working together for many years; we even went to judges’ school together,” Dobrich said. “We’ve had a good working relationship and we’ve known each other academically. We have respect for each other and work well together. … These collaborations are ways we can make our families healthier and safer and provide for our children.”

“This collaboration, and all our collaborations, are in the universe of state and tribal courts working together,” he said. “There is this invisible common ground we are working on and tribes are a responsible member of the family of governments.”