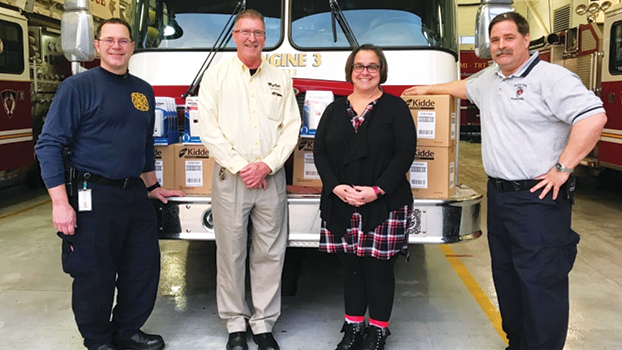 With the funds, firefighters were able to purchase 25 carbon monoxide detectors that have been installed in homes where there was a need. Fire crews went through the city to install these detectors in city homes.

Niles Fire Chief Larry Lamb said his department was happy to find that some homes already had a carbon monoxide detector installed, however there clearly was still a need in other homes.

“In some areas, we are finding that only 20 percent of homes that need a CO detector actually have a working unit,” Lamb said.  “Any home with an attached garage, fireplace, or fuel burning appliance should have a working CO alarm.”

Sanya Vitale, the city’s community development director, got city council approval to allocate dollars from the Community Development Block Grant so that additional carbon monoxide detectors could be purchased.

These additional 150 units have been distributed throughout the city where there was a need.  The Community Development Block Grant also funded the purchase of smoke detectors for installation in owner occupied homes within the city.

City leaders asked that residents make sure their smoke detectors are working and that they also lend a hand to make sure senior neighbors also have working detectors.

Residents who need a smoke detector or know someone who does are encouraged to call the city at (269) 683-2374 to have one installed.

The Niles City Fire Department officials said they are thankful to the Community Development Department, Martin’s local Manager Bill Alford and his staff and to all of those in our community who supported the Snapshots with Santa fundraiser.