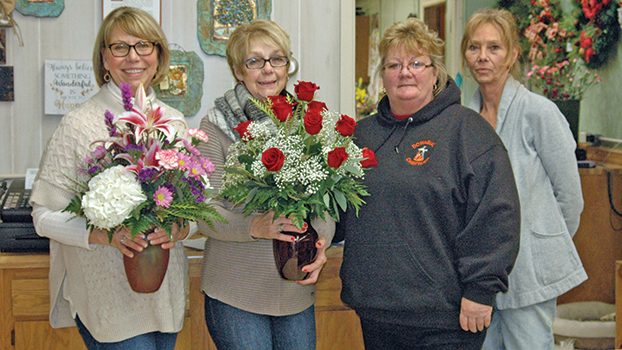 DOWAGIAC — With Valentine’s Day right around the corner, Dowagiac residents are starting to feel the love and romance in the air as they plan a special night with their respective sweethearts.

However, local businesses are gearing up for a different kind of Valentine’s Day, one of filling orders and delivering goods to the people of Dowagiac.

Several specialty shops in downtown Dowagiac have already begun preparing for the Valentine’s day rush, with business owners saying that the romantic holiday is one of the busiest days of the year.

Walking into Caruso’s Candy and Soda Shop on Front Street, one is met with the sight of dozens of red and pink heart-shaped boxes lining the walls. In a corner of the shop, an employee arranges dozens of small candies into one of the boxes, getting ready to ship them around the world with some boxes going as far as Japan and the Virgin Islands.

This is how the shop will look until Valentine’s Day has come and gone, said owner Julie Johnson.

“Valentine’s Day is our second busiest candy holiday of the year, the first being Christmas,” she said. “To prepare, we’ve been putting in nights and weekends.”

Johnson said she has been working at Caruso’s since she was a little girl, and each year around Valentine’s Day, she fills hundreds of heart-shaped boxes and hand-dips countless chocolate-covered strawberries.

Having experienced so many years of the Valentine’s season at the candy shop, Johnson said she believes that it is the tradition of the candy that makes it so popular for Valentine’s Day.

“It’s a tradition to get a heart-shaped chocolate box from Caruso’s for a lot of generations, five generations now,” she said. “My sister lives in Texas, but she still has me send her [a box] every year, because it is tradition.”

Johnson said the tradition of the candy boxes will keep her occupied for the next week, filling last-minute orders.

“It’s a crazy week, because lots of guys don’t order ahead of time,” she said. “We are going to be very busy.”

The florists at Booth’s Country Florist on Commercial Street are just as busy as the candy makers at Caruso’s.

Owner Patty Booth said the business sees around 100 more orders on Valentine’s Day than on a regular day at the shop.

“It is the largest single day of selling flowers and deliveries,” she said. “We probably sell around 1,500 roses, 1,000 carnations, plus all the other types of flowers we carry. Our daily sales would be a fraction of that.”

To prepare for the day, Booth and her team have been ensuring they have enough inventory and cleaning and cutting flowers.

The shop will be creating a number of themed arrangements for the romantic day, Booth said.

“It’s a lot of work prior to the day. It’s probably about a week’s worth of getting product in and preparing them for arrangements,” she said.

Despite the extra work of the holiday, both Booth and Johnson said they are excited for Valentine’s Day, not only because it brings in extra business, but because it ties them to the community.

“It’s love of the businesses,” Booth said. “We are able to provide something special that people don’t normally get on an everyday basis, so it’s very uplifting and exciting for people to get these deliveries at work or at home. … We are happy to be a part of that.”

NILES — Heading into the 2017-18 season, Brandywine coach Josh Hood needed to find the answers to a lot of... read more