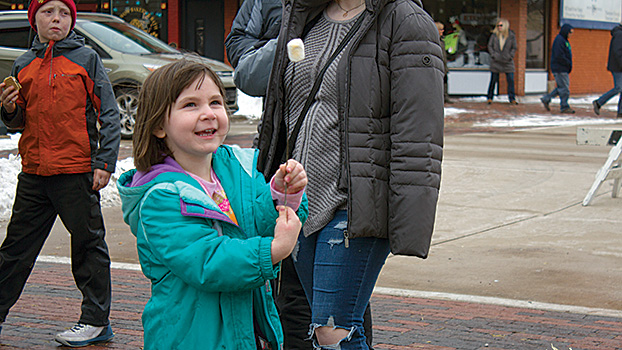 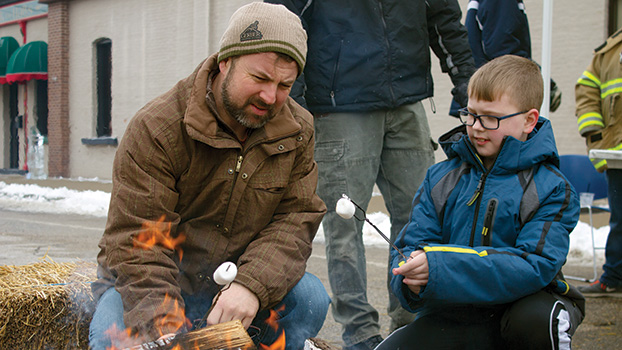 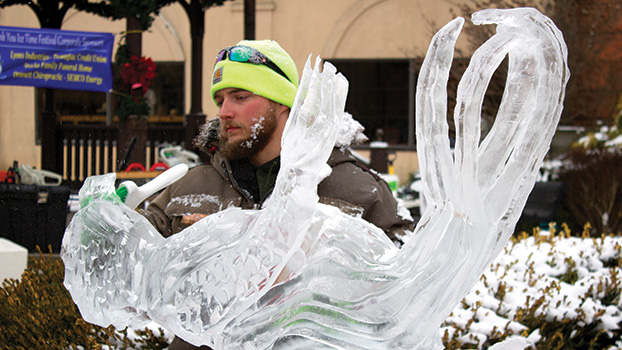 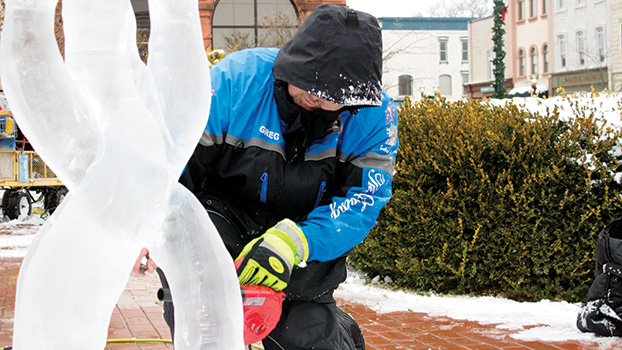 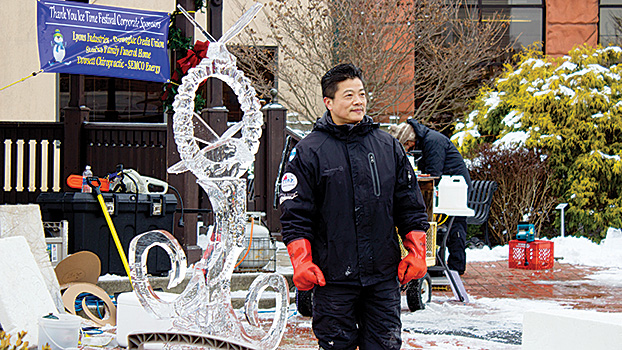 DOWAGIAC — With sled dogs, bonfires and frozen statues aplenty all popping up downtown, Dowagiac was transformed into a veritable winter wonderland Saturday.

In spite of the below-freezing temperatures, hundreds of people bundled up in parkas, hats, gloves and scarves to visit The Grand Old City during the Greater Dowagiac Chamber of Commerce’s 22nd Annual Dowagiac Ice Time Festival, which took place throughout downtown Saturday.

There was plenty of frozen fun to be had during the morning and afternoon, including demonstrations from mushers with Mid-Union Sled Haulers, and lumbering competitions between forestry teams hailing from Michigan State University and Ohio State University. Another “hot spot” was the bonfire located on Commercial, where local firefighters and police officers served s’mores and cups of hot chocolate to visitors looking to warm up during their ice time adventures.

Businesses throughout the downtown district were packed that day as well. Local restaurants and eateries once again participated in the festival’s annual Chili Crawl, with dishes ranging from spicy chili to white chili to — in the case of The Baker’s Rhapsody — to dessert chili, with the local bakery whipping up a pot of spicy chipotle brownies and dark roasted espresso beans, smothered in chocolate creme anglaise and drizzled with salted caramel.

Many businesses also offered special discounts throughout the morning and afternoon. The Wounded Minnow Saloon also hosted a craft brew and wine tasting, while Bow Wow Bakery and Bath teamed up with the Cass County Animal Shelter to offer pet adoptions to customers.

The highlights of the festival, were, as always, the dozens of frozen ice carvings that sprang to life on the sidewalk outside downtown businesses. A group of several carvers from around the area spent Saturday sculpting the blocks of ice into new forms and shapes, including beer mugs, snowmen and company logos.

At noon, the carvers assembled at Beckwith Park for the festival’s annual ice carve-off, a timed competition where the group of artisans worked to create the best sculpture within a two-and-a-half-hour time limit.

Among the carve-off winners Saturday was Greg Beachey, of New Paris, Indiana, who took home the $100 third-place prize for his sculpture, an abstract carving of several intertwined pillars spiraling up together. Beachey said he came up with the idea on the fly, so he was happy to win an award for it.

The Indiana man said it was a nice way to cap off his return to Ice Time, as he has not been able to attend for the past six years.

“It’s been great,” Beachey said. “I carved up here for years and years, so it’s nice to be able to come back. This is always a fun little town to visit.”

Beachey also carved two other pieces Saturday, a sculpture of a hand holding a beer mug outside Zeke’s and another of a snowman without a head, so that people could have their picture taken with their head on top.

Beachey said he, like the other carvers, came into ice carving through food services, and has been working in the medium for the past 20 years.

“Ice is just a lot of fun to play with,” he said. “It’s a great medium because you can do anything with it, depending on how adventurous and detailed you want to be.”