EDC board chair delivers presentation to Cass County board 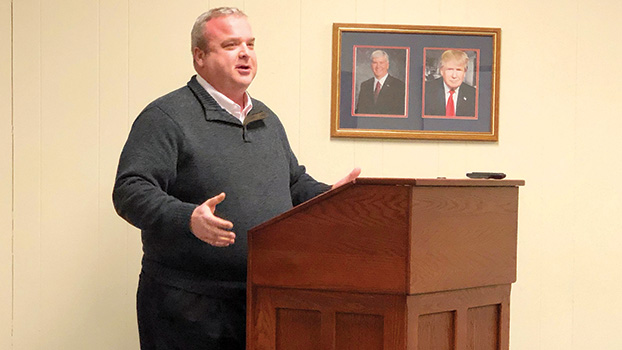 Cass County Economic Development Corporation Chairperson Troy Clay shares some of the progress the agency has made in recent years to improve the local business environment with the board of commissioners Thursday. (Leader photo/TED YOAKUM)

CASSOPOLIS — With spirits still running high following last Wednesday’s well-attended visioning session at the Cass County Council on Aging, the local economic development corporation is looking to capture that positive energy in its continuing efforts to drive the economy forward.

Cass County Economic Development Corporation Chairperson Troy Clay shared what efforts he and others with the agency are making to capture new businesses and improve those that already call the county home during his presentation to the Cass County Board of Commissioners in Cassopolis Thursday. His presentation came one night following the first “Imagine Cass” at the COA, which drew in 193 people to share their vision of a better future for Cassopolis.

“Frankly, I was a little taken aback [by the attendance],” Clay said during his presentation Thursday. “I thought we weren’t going to have enough space. It was packed, but it was great, really great.”

Clay said the meeting was indicative of the kind of energy members of the EDC are trying to create in Cass County.

Since joining the corporation board in 2014, Clay said that he and others with the organization have sought to strengthen the corporation’s role as a facilitator — as an agency that brings groups together in order to make a difference in Cass County.

From 2014 to 2016, the EDC has worked with several other economic development agencies to devise a strategic plan on how to accomplish those goals. At the end of the process, the EDC came up with three key priorities:

• To retain and assist existing companies in their growth efforts

• To know, grow and market the county’s existing workforce

The EDC is currently developing two nonprofit entities to assist in these priorities.

The first is a 501(c)(3) that will capture local, distressed properties — such as the county’s mothballed 1899 courthouse in downtown Cassopolis — to help return them to the county economy, by assembling engineers, architects, property developers and other experts to give input on how to rehabilitate and reuse these structures, Clay said.

“If we had a board of volunteers from throughout the county, who would be interested in spending just some time on a regular basis to look at these properties, we can help move those in the right direction,” Clay said.

The other nonprofit is a 501(c)(6) that Clay said is much further along in development, called the Business Partnership of Cass County. This nonprofit will be focused on assisting existing businesses to grow and to attract new ones to the county, and will be comprised of three committees intended to support businesses, retain and attract talented workers, and to improve the quality of life throughout Cass County.

Clay said he hopes that the EDC’s new efforts will help encourage the same kind of collaboration and positive momentum that is kicking off in Cassopolis to grow in other communities across Cass.