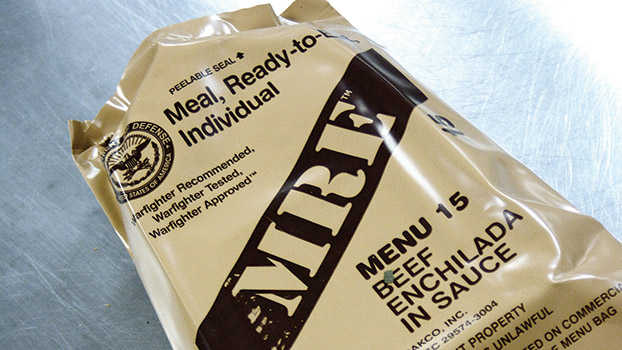 A packaged Meal, Ready to Eat lies on the counter at Niles High School. Students learned how to prepare the meals during a culinary class Thursday. (Leader photo/KELSEY HAMMON)

NILES — Niles High School students in Jayson Zoll’s culinary class got a taste of what it is like to eat while serving the country as a member of the armed forces.

On Thursday, students learned about how to prepare a Meal, Ready-to-Eat — a dehydrated, meal that is packaged for on the go use. While the meals do not require much preparation, outside of rehydrating the meals with water and warming them with a heating device, Zoll thought students could learn a bit about the food preservation process. A taste test would also help to emphasize the lesson, he said.

“I think students will understand the process of preserving foods and how it works and make a meal out of that,” Zoll said. “It is something different than preparing fresh ingredients.”

Zoll said National Guard representatives contacted him and asked if they could lead a culinary class about MREs.

Before students tore through the brown packaging encasing their meals, Sgt. Jonathan Anderson from Michigan Army National Guard talked to students about the unique design of MREs and how they help to sustain those in the field.

“You cannot be combat efficient if you are not getting enough nutrition,” Anderson said. “If you don’t eat enough food, you will not stay healthy. My favorite is the omelet, because it is delicious.”

The packaged meals are created to withstand parachute jumps, desert heat and moist jungle weather. They have a shelf life of three and a half years. Meals contain an entrée, sides, drink and candy. Each meal contains 1,250 calories — a McDonald’s big mac has only 563 calories. The meals are created to provide lasting energy with little preparation or fuss. There are 24 varieties of entrees available.

After learning about how MREs are used in the field, students donned their chef’s coats and hair nets and set to work re-hydrating by placing the packaged ingredients in a bag of water, which reacts with a heating device to warm the food.

“It is not your regular Hacienda experience,” Moore said.

While Moore said the tacos were appetizing enough, she described the filling as somewhat runny.

“I could eat it,” Moore said. “I don’t know about every day though.”

The students also sampled pound cake and pears, and a beef jerky style meat stick. The students said a few of the items had a distinctly packaged taste.

Students who take Zoll’s culinary classes learn about a variety of cooking styles and preparations, from how to use knives to whipping up breakfast foods, soups, sauces and entrees and lunch.

But before they get to learn about crafting their own meals, students in Zoll’s classes spend 10 weeks learning about safety and sanitation in the kitchen. Students must pass a certification test reviewing these skills to advance to other lessons.

“It is a wide variety,” Zoll said. “It is more than how to cook at home. We want the students out learning industry skills.”

While students have the potential to learn skills that could start them down a culinary arts career path, Zoll also emphasized the importance of youth gaining basic cooking skills.

“The knowledge of cooking at home is not being passed on, so this is a good program for them to learn how to cook,” Zoll said.

With this knowledge students can hopefully make healthier choices, instead of eating out every night or subsisting solely off of fast food, Zoll said.