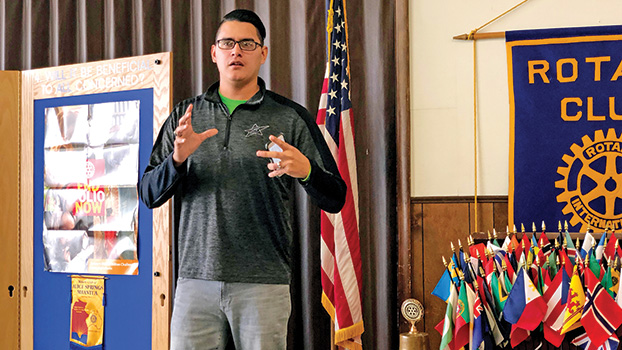 That is the number of students who drop out of high school every day across the U.S. For most of these teenagers, the root of their decision goes as far back as middle school, when the pressures of adolescence and increasing responsibilities in the classroom causes them to simply “check out.”

Over the past several years, a group of dedicated volunteers with the Five Star after-school program have worked with the youth at Dowagiac Middle School to combat that defeatist mindset, and to get children to begin living by five core principles they can carry to success for their rest of their lives: respect, responsibility, integrity, sacrifice and courage.

Since the beginning of this latest session, or “season,” of the program at the middle school last month, the volunteer coaches who guide and mentor the students have worked first to get attendees to take ownership of the thousands of thoughts and decisions they make every day, and to focus more of positive ideas than to dwell and fester on the negative emotions — especially ones focused on suicide or harming others.

Vallardez shared the positive impact the Five Star program is making with Dowagiac teenagers during his presentation to members of the Dowagiac Rotary Club at the Elks Lodge Thursday afternoon. Vallardez — who was joined by fellow Five Star coach, Pat O’Keefe — was invited to speak to the club by Dowagiac Rotary President John Seculoff.

Since its introduction at Dowagiac Middle School six years ago, the Five Star after-school program has made a difference in the lives of hundreds of local children, Vallardez said. Last year, 94 students participated in the program — of those, 80 percent raised their GPA, and had a 3.0 or higher, Vallardez said.

The Five Star program is a nonprofit based out of Elkhart, with presences in 10 schools in Indiana and Michigan. Of these, Dowagiac is the largest, both in terms of student participation and volunteers, Vallardez said.

In spite of these numbers, what has made the largest impact for Vallardez has been seeing how the lessons and activities improve the lives of the students he and other coaches work with during the school year. Vallardez said he recalled one student in particular who, before attending the program, had experienced suicidal thoughts and was suffering from a major identity crisis.

“One season in Five Star Life changed [his] life,” Vallardez said. “Now, he is one of our leaders, and our current student of the season. He is now leading other students out of that mindset.”

NILES — An Oklahoma City resident whose dad and sister were found dead in their Niles home is now awaiting... read more