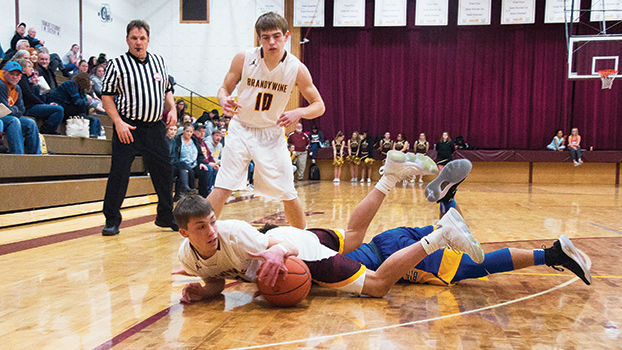 The Lady Cats cruised to an easy 59-19 win, while the boys’ second-half surge helped lift them to a 68-60 victory over the Bison.

Brandywine’s 45-4 lead at halftime forced the mercy rule on New Buffalo in a game that lasted just under one hour. 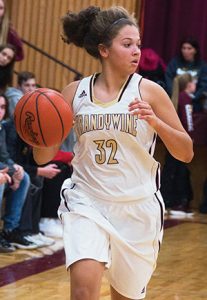 The win improves the Cats’ record to 12-2 overall.

Coach Josh Hood said it was nice for his team to not have to all-out battle in its first of four games over the next week. Brandywine plays Thursday in Bridgman, Saturday at Marcellus and will host Coloma on Monday.

“This is a long week for us and I have a feeling come Monday these girls will be beat so I was glad we were able to somewhat rest tonight and give our bench some much needed playing time,” Hood said.

Madison Bailey and Zikiyyah Abdullah led all scores with 13 points and Nicole Sachman had 10 for the Bobcats.

Alyssa Adamczyk and Halie Ebersol were brought up from the JV team and contributed rebounds and a 3-point bucket to the stats.

“We’ve got one player out right now (Melanie Martinez),” Hood said. “She hurt her ankle against Buchanan, so it was nice bringing those girls up and even better that they saw playing time and helped the team out. We have a big game against Bridgman and have been very bad the last few years on their home court in terms of our game there, so we need to be healthy and ready.”

During the third quarter, Brandywine head coach Nathan Knapp’s voice echoed across the gym as his frustrations with his team’s performance were clear.

“Do not save your energy for the fourth quarter,” he said. “Go all out now and play like the team I know you are.”

That sternness ignited his team, who trailed New Buffalo from the opening tip.

In the first half, the Bobcats just could not stop the shooting of Bison senior Julian Hymes, who had 20 of his team’s 38 points at halftime.

Brandywine was down 21-8 after the first quarter and 38-23 entering the third.

But, as the Bobcats have done all season, the second half was a turning point.

Derrick Miller had six points out of the gate for Brandywine and once that echoed statement form Knapp was made, the Bobcats came to life.

Trailing 47-42 with 1:44 left in the third, Shane Brown bombed a 3-point shot to cut the lead to two. Jordan Abrams responded 10 seconds later with another three, giving Brandywine its first lead of the night, 47-45.

The two teams were tied at 51 and 53 early in the fourth, but it was Jaden Croom’s bucket and free throw ignited a 15-0 run for Brandywine, leading to the victory.

“We don’t show up ready to play and I don’t understand it,” Knapp said after the game. “We bury a hole, get down by 20 or more points, then have to put up battles just to come back. If we just buckle down and play the way we do in the second half the entire game, we wouldn’t be in these situations time and time again.”

Knapp was pleased with his team’s containment of Hymes in the second half, where he added just seven additional points to his game-high 27.

Like the Lady Cats, the boys also have a fierce week of hoops ahead. Brandywine travels to Bridgman Friday night and Marcellus Saturday before landing back home Monday against Coloma.