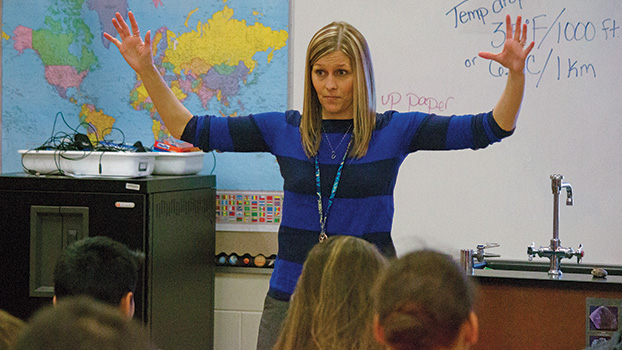 DOWAGIAC — In spite of the complexities and intricacies of the subject matter she teaches, it is not very difficult to spot what motivates Dowagiac Middle School’s Amy Cummings.

Whether she is describing how wind patterns from either the north or south affect the weather, or how temperature is the measure of the speed at which microscopic particles in a particular substance are moving — “like a million bouncy balls colliding with each other,” as she puts it — to her eighth-grade classroom, the teacher’s eyes brim with passion for science. Even on a Monday, when her classroom is still shaking away the mental cobwebs from a weekend away from their studies, Cummings’ passion shines as she connects with her young wards.

A few moments before the first bell of the morning, as the teacher bounced from desk to desk to lay out calculators and other materials for her incoming students, she turned around and widely grinned when asked about her favorite subject.

“I just love science. It’s what I live for,” Cummings said. “I love everything about it, and I feel like I need to share it with others. My family actually makes fun of me, because science is all I talk about.”

The self-proclaimed “science geek” and her passion for education has recently earned her quite the distinction: the 2018 Catalyst Education Award’s Teacher of the Year.

Dowagiac Union School Deputy Superintendent Dawn Conner and former Dowagiac Middle School Principal Matt Severin nominated Cummings for the award last year. The teacher was told in September that she had received the title, but was told to keep mum about it until the ceremony this month, Cummings said.

“I’ve had to keep it a secret this whole time,” she said.

For Cummings, the honor is the highlight of her decade-long career with Dowagiac Union Schools.

The Paw Paw native dreamed of teaching for as far back as she can remember, she said. Her passion for science, however, was not kindled until later in life — in fact, she hated the subject so much in high school that she stopped enrolling in science courses after her sophomore year, Cummings said.

All of that changed, though, after she began taking a geology class taught by Deborah Coates at Kalamazoo Valley Community College. Though the student figured the Earth science course would be a quick and easy way for her knock out her science prerequisite, Coates’ energetic, hands-on approach to teaching caused the young woman to fall in love with the field herself, Cummings said.

“I wouldn’t be here right now if it wasn’t for her,” Cummings said about her former professor, who she continues to stay in touch with.

Cummings has approached teaching science the same way she learned it under Coates: by making it fun, relatable and approachable for students.

Cummings does not rely on long, drawn out lectures for her daily lessons, but instead engages her students through interactive activities and practical instruction. For example, last September, she and her class followed the real-time development of the powerful hurricanes that struck the Atlantic region, tying real world cases to what they had learned about adverse weather conditions.

Cummings often shares her own personal stories of her times traveling the country on scientific field studies to reinforce these lessons. One time, she included a question about how she hurt herself the first time she used a rock hammer on her one of her exams as extra credit, shortly after she shared the tale with the class, she said.

“I’m not the type of teacher who makes her students pull out a book and start reading aloud in class,” she said. “Everything I use, I create myself.”

Of course, creating her lessons requires her to spend at least two hours working every night at home — a challenge that is made even more difficult with her 7-year-old daughter, Brynn, vying for attention every evening (her daughter’s middle name is Orion, named after the constellation that was hanging over the hospital the night she was born, Cummings said).

The feeling she gets knowing that her dedication and passion for teaching has earned her the title of “Teacher of the Year” is indescribable, Cummings said.

NILES — Just after 3 p.m. Friday, a line of people formed adjacent to a collection of shopping carts in... read more