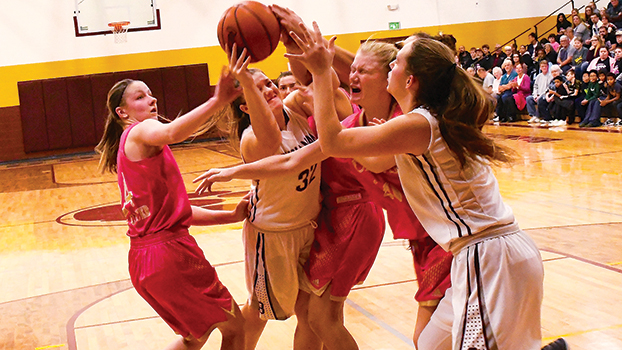 The Bobcats beat the Bucks for the second time this season in girls basketball 46-32.

Down by 24 points in the first half, the Brandywine boys showed heart and resilience in the second half but came up short against Buchanan for the second time this season, this time falling 51-47.

Brandywine (11-2) jumped out to a quick 4-0 lead in the opening minutes of the contest behind sophomore All-State point guard Zakiyyah Abdullah.

After each team traded buckets, Buchanan (7-4), despite nine first-quarter turnovers, exploded on a 10-0 run and led 14-10 after one.

Brandywine took the lead back on a Megan Schmidt three-point basket to make the score 17-16 with 4:05 left before halftime. Schmidt would finish with eight points, five rebounds, two assists, a steal and a block.

The Bobcats would go into halftime clinging to a 21-18 lead.

Senior Jayla Bibbs, the Bucks’ leading scorer, drained a three-point basket and tied the game at 21 at the beginning of the third quarter. Bibbs was held to eight points in the game, but finished with 10 rebounds, 10 assists and a steal.

“Anytime you can have Bibbs under 10 points you are going to have a good game,” Brandywine coach Josh Hood said. “We were able to hold her under 10 points in the previous game as well.

Behind the “Bobcat Power” chants from the Brandywine student section, Brandywine went on an 11-2 run, forcing a timeout by Buchanan coach Gabe Miller.

Leading 32-27 at the end of the third quarter, Brandywine would never look back and comfortably get its 11th win of the season.

Abdullah would tack on six more points in the fourth quarter and give her a game-high 16. She would also have five rebounds, five steals and three assists.

Brandywine outscored the Bucks 25-14 in the second half.

Apart from Bibbs, Buchanan got eight points from Morgan Lenox and four points each from Brooklyn Krumrie and Emma Lozmack.

Brandywine will host New Buffalo as part of a doubleheader Tuesday. Buchanan will travel to Edwardsburg on Tuesday.

Winning on a last second tip-in over Brandywine in Buchanan on Dec. 8, the Bucks looked to even their record and get out to a great start against the rival Bobcats.

This time the score was 51-47, but it was not as easy as many would think.

Jumping out to a quick 12-2 lead, Brandywine coach Nathan Knapp called a timeout with 3:32 left in the first quarter.

It was not turnovers that were killing Brandywine in the first half, it was their shooting.

The Bobcats missed nine layups, shot 20 percent (6-30), and shot 25 percent (3-12) from the free throw line. To make matters worse, Brandywine was 0-for-20 from beyond the arc before it finally made its first three-point basket.

“It’s hard to win a game when you shoot the ball like we did tonight,” Knapp said. “You can’t shoot yourself in the foot against a good team like that. I don’t know if it was because this was finals week and the guys had a half day today. But I think we didn’t have the right mindset tonight.”

Leading the charge in the first half was Buchanan senior point guard Austen Taylor, who drained three three-point baskets and the Bucks led 36-15 at halftime.

Taylor finished with a game high 16 points and added four rebounds, an assist and a steal.

Croom finished tied with a Brandywine high 13 points and added on 11 rebounds, three steals, two assists and a block.

Croom’s dunk started a 7-0 run, and turned the momentum in favor of Brandywine. The Bobcats finished on a 12-2 run to cut the Bucks’ lead to 43-31 heading into the final quarter.

Brandywine was able to whittle the deficit down to 10 points with 4:22 left, forcing a timeout by Buchanan Coach Reid McBeth.

However, a quick Bucks turnover led to a fast break Brandywine basket after the timeout.

Buchanan was able to hold off continuous Brandywine efforts over the last four minutes for the win.

“We didn’t really play with much poise in the end,” McBeth said. “Brandywine’s press got to us a little bit.  It’s a rivalry game. The past four have been close. Hats off to Brandywine for fighting back and sticking to their game plan.  Most kids would have just thrown in the towel.”

Isaiah Rimpson had 11 points for Buchanan, while Carter Jeffries  and Chris Young both finished with nine.

Brandywine will host New Buffalo Tuesday, while Buchanan will host Comstock on Friday.