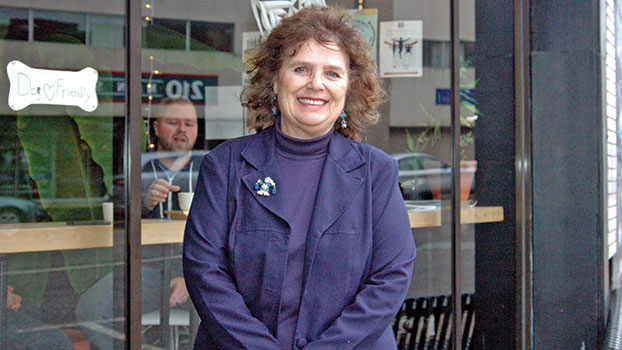 Brenda Beadenkopf, 70, of the Niles-Edwardsburg area poses for a photo outside Top Heavy Coffee in Niles. She is set to publish a book about the accomplishments of her father Charles Walker, who was a prominent nonviolence leader. (Leader photo/SARAH CULTON)

NILES — Brenda Beadenkopf, 70, of the Niles-Edwardsburg area, can still remember the moment her mother took her to her family’s basement to show her the history of her father.

“Someone has to write a book about your father,” Beadenkopf recalled her mother saying to her at the time. “Or else, all of this will be lost.”

It took a few more of her mother’s urgings before Beadenkopf decided that she would be the one to put her father’s story to paper, leading her on more than a decade’s long journey of research and writing.

Soon, Beadenkopf will see the fruits of her years of labor as the first volume of her book “A Quaker Behind the Dream: Charlie Walker and the Civil Rights Movement” is set to be published this March on Amazon.com.

Beadenkopf’s father was Charlie Walker. Walker (Sept. 17, 1920 – July 11, 2004) was a prominent Philadelphia Quaker activist and trainer in non-violence during the civil rights movement. He partook in and helped organize non-violent demonstrations, and worked with civil rights leaders, including Rev. Martin Luther King Jr., to spread the message of nonviolence.

“He really threw himself behind the civil rights movement to ensure that it was non-violent,” Beadenkopf said of her father. “He was an expert in non-violence, and as non-violence was something Quakers had been working on for years, it was really important to him as a Quaker to make change through nonviolent means.”

After several research trips to and from Philadelphia, Beadenkopf learned more and more about her father’s life and the history of Quaker non-violence. The more she learned, she said, the more she knew she had to write her father’s story down.

“Charlie was caring, brilliant, amazing,” Beadenkopf said. “There was just so much history that is fascinating to me. I actually had to cut my book down a lot. There was so much that no publisher would touch my book unless I cut it down.”

The book will focus on Walker’s life, starting with his birth, and the history of non-violence in the United States and the civil rights movement, Beadenkopf said.

She added that she hopes the book will be picked up and used by teachers and professors in the classroom as she feels that student could learn from what she calls “the unique perspective” the book offers.

“I’m not saying it’s a better or more important perspective. It’s just a different one,” Beadenkopf said. “It’s the story of how a Philadelphia Quaker impacted the civil rights movement.”

To Beadenkopf, who herself subscribes to a Quaker way of thinking and attends Penn Friends Community Church in Cassopolis, the most important aspect of the book is the way it details the history of the non-violence movement.

“Nonviolence is so important to so many movements. Nonviolence and bringing people together and help people listen to each other,” she said. “Kids growing up need to learn about nonviolence, and they don’t really. … I would love to see the history of nonviolence and the civil rights movement taught in high schools.”

Beadenkopf said that she hopes her book will bring people together the same way that her father’s message of nonviolence did during the height of the civil rights movement.

“I’m not just trying to reach one group. I’m reaching out to all people, black and white,” she said. “Maybe we can come together better as a nation, right now as everything seems to be falling apart, with the message of nonviolence.” 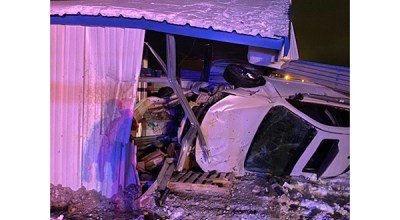 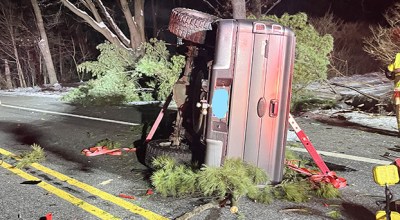