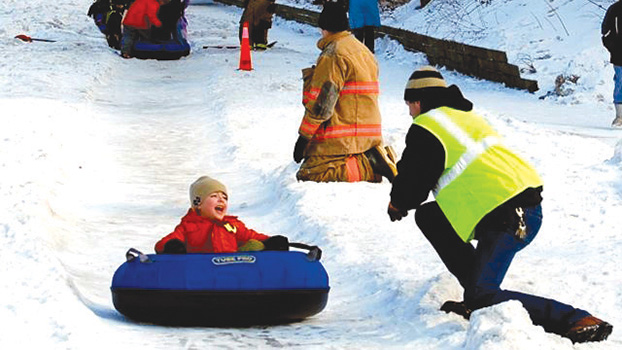 Buchanan leaders announced that the upcoming Thrill on the Hill event, scheduled for this weekend, has been cancelled due to unfavorable weather. (Leader file photo)

BUCHANAN — The people of Buchanan were supposed to spend this weekend bundled up in their winter gear, squealing with delight as they slid down a giant snow hill, before stepping inside a downtown business to warm their bones.

However, those plans have changed as Buchanan officials have cancelled their annual Thrill on the Hill event, which was slated to take place Friday and Saturday, due to weather. This year’s cancellation is the second time that Thrill on the Hill has been cancelled in the eight years since it began.

For the event, city organizers typically invite people from all over to slide down a giant snow hill that is created on Front Street. Games and other entertainment are also usually featured.

City Manager Bill Marx said that the city cancelled this year’s event due to weather conditions that would not be favorable to building the hill.

“In order for us to [host Thrill on the Hill] we need certain conditions, which is 22 degrees at most,” Marx said. “When we looked at the projected forecast for this week, it was very clear we weren’t going to have those conditions whatsoever.”

Marx added that the city cancelled the event ahead of this weekend to allow local businesses and people that were travelling from out of town for the event to make alternate plans.

“If we don’t have a hill, people get really upset if we cancel at the last minute,” Marx said. “It was really hard for us to make that call when there was snow on the ground and cold temperature, but we knew that if the weatherman was correct, we should have been planning for the summer thrill. We have almost spring-like temperatures.”

This year marks the second year in a row that the Thrill on the Hill, which is always slated for the last weekend in January, has been cancelled due to weather.

“When we started [Thrill on the Hill], we looked at historical records to see what weekend would best, and historically, the last weekend in January had perfect weather,” Marx said. “And it did, until the last two years. We’ve had six years of great events and better conditions.”

Marx said that the city is currently tossing around ideas about how to preserve the winter Thrill on the Hill event should poor weather continue to be a threat to the event.

“It has prompted a discussion about changing the weekend, some have suggested during the [school] winter break, but that presents its own challenges with people being out of town, and there is still no guarantee of the right weather,” Marx said. “Ultimately, it’s an educated guess, a cross your fingers guess, about what [weekend] to pick.”

“That’s our next big thing,” Marx said of the summer Thrill on the Hill. “We hope people will show up and enjoy it.”

Lanier steps up for Dowagiac

DOWAGIAC — Clinging to a one-point lead early in the fourth quarter, the Dowagiac boys basketball team needed someone to... read more