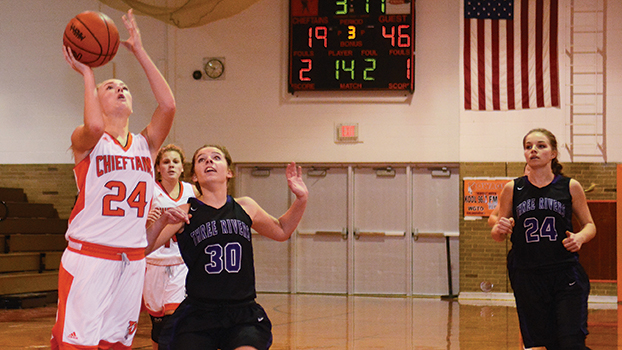 DOWAGIAC — The Dowagiac girls basketball team gave a better effort against visiting Three Rivers Friday night, but it did not stop the Chieftains from falling to the Wildcats 64-33.

Dowagiac dropped its second consecutive game despite getting off to a fast start.

The Chieftains trailed Three Rivers (8-2, 3-1 Wolverine South) just 9-8 late in the opening quarter before the Wildcats went on a 23-0 run that led to a 32-8 deficit for the Chieftains before Tania Parker-Wilson hit a 3-pointer with 1:59 to go in the opening half.

“Our biggest problem is turnovers,” Dowagiac coach Brent Nate said. “We had 25 of them in the first half. The game right now is going too fast for us. Until the games slows down for us, we are going to have trouble with turnovers.”

Three Rivers would add a free throw before halftime to lead 33-16.

The Chieftains (3-7, 1-3 Wolverine South) trailed 50-24 after scoring just eight points and were outscored 14-9 in the final eight minutes.

Dowagiac travels to Paw Paw for a 7:15 p.m. game Tuesday.