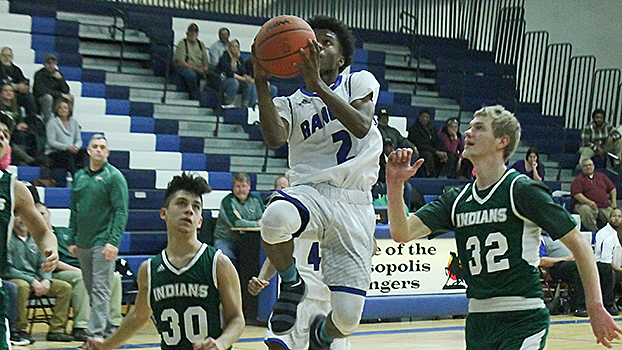 CASSOPOLIS — The Cassopolis boys basketball team has continued its winning ways into the New Year.

Facing a 35-27 halftime deficit to the visiting Hartford, The Rangers beefed up their defense and managed to remain undefeated with a 67-60 victory Tuesday night.

High-flying Cassopolis junior Tyrese Hunt-Thompson got things going with an alley-oop dunk from senior Kiambu Gary just seconds into the contest, looking to set the tone for the rest of the game.

But the Indians had other plans.

Defensively, the Rangers created seven turnovers and were able to get good looks at the basket, but were unable to put them away.

In the second quarter, Hartford continued its red-hot shooting and tacked on four more 3-pointers to increase its advantage to 35-27 at halftime.

“Unfortunately, this has happened to us in every game so far,” Cassopolis coach Ricky Evans said. “We have got to play defense for 32 minutes so the other team cannot get open looks like they (Hartford) did.

“Until we get better we are going to struggle. The boys did have a better game defensively in the second half.”

Cassopolis would create another eight turnovers and again was unable to capitalize.

The Indians won the rebounding battle 27-10, while the Rangers won the turnover battle 15-5 and turned the ball over just four times compared to six by Hartford.

“We would love to continue to use our speed to transition,” Evans said.  “But these are 15- and 16-year-old kids. Sometimes they get into their own head and forget what they are supposed to be doing. We do not want to play half court. We want to get down the court.”

The Rangers would start the third quarter with an 8-0 run to tie the game at 35 with five minutes remaining. While they were able to keep the score close, the Indians would continue to hold the slim lead at 47-46 going into the fourth quarter.

Ten fourth-quarter turnovers by Hartford (1-4) proved to be their downfall.

“The fourth-quarter run was big,” Evans said. “We needed that, and again it was because of the increase in defensive pressure, and we hope that they realize that that is how we are going to win games.”

The defensive pressure by the Rangers led to six steals and seven assists in the final eight minutes.

Cassopolis’ Xavier Smith and Brandon Anderson would both go 6-of-6 at the free throw line to help the Rangers hold on to the lead.

The Rangers (5-0) had four in double figures as Gary led the way with 16 points. He also had eight assists, four rebounds and three steals on the night.

Smith finished with seven points, a pair of steals and a rebound. Anderson chipped in with six points, two rebounds, an assists and a steal.

The Indians’ were led by William Martinez’s game-high 25 points.

Cassopolis will host Mendon Friday night and then Bridgman on Saturday.