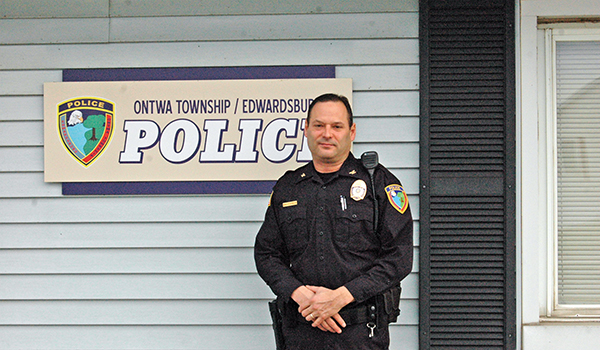 EDWARDSBURG — A donation from an Indiana man will allow the Ontwa/Edwardsburg Police Department to take their work into the tech age.

The police department recently received a donation to purchase four body cameras to be worn by officers during interactions with civilians. Granger resident Ben Clark donated $5,300 for the department to order the cameras.

“Mr. Clark called and asked if we needed anything, and I told him we were looking into body cams, and he generously donated the money,” said police chief Doug Westrick. “We are very grateful.”

Westrick said that the department has been looking into getting body cams for awhile, as video evidence is becoming more important to prosecuting cases and will make officers’ cases more solid.

“They are a good thing,” Westrick said of body cams. “We are excited to get [the body cams] and help out on some of our cases.”

Body cams can also help protect both officers and the public, by being able to show exactly what has occurred during an interaction between an officer and a member of the public, Westrick said.

“People also tend to behave a bit better when they know they are on camera,” Westrick said. “And the officer is reminded that he is on camera, as well. Nowadays, with some of the things going on with law enforcement [nationally], [body cams] are a good thing to have to protect the officers and the public as well.”

As many other local police departments, such as the Dowagaic Police Department and the Cass County Sheriff’s Office, already use body cams, Westrick said that it was time that Edwardsburg had them as well.

The new body cams, which the department plans to have up and running in January, will be synced to the cameras already installed in the officers’ squad cars, meaning that every time the squad car cameras turn on, the body cameras will turn on as well. This will help ensure that officers remember to turn on their body cams, Westrick said.

Though the police department has six full-time officers and one part-time officer, Westrick said that the four body cams will be enough to cover all the officers by trading them around and sharing them. Next year, the department is looking into getting a new squad car, and with it, a fifth body cam.

“Eventually, I would like to have [a body cam] for every officer,” Westrick said. “But four is a great start and will get us to where we need to be on a daily basis. … We are grateful for the donations we receive from individuals that allow us to have things like this. We have a very generous community.”

Clark, the man who donated money for the body cams, is a Granger resident, though he owns property in Edwardsburg. He said that around this time of year, he tends to donate to the Cass County Sheriff’s Office, but this year decided to give to the Ontwa/Edwardsburg Police Department.

“I just figured it was the holiday season, and I knew Doug was the new police chief, so I called him and asked him if anything was on his wish list,” Clark said. “My family is fortunate enough to make donations to different places in the community, and I always like to make sure the police are funded well and equipped in order to be successful and efficient.”

Clark said that he was happy to grant Westrick’s request for body cams, as Clark believes they can be an important piece of gear in police work.

“To keep everyone accountable, I thought body cams was a nice gift for [the police officers],” Clark said. “I think they need the evidence of having a body camera on them, and [body cams] can help they way police officers and people interact with each other.”

EDWARDSBURG — Huddling together to fight off the cold of winter day, several members of the Buchanan Blue Star Mothers... read more