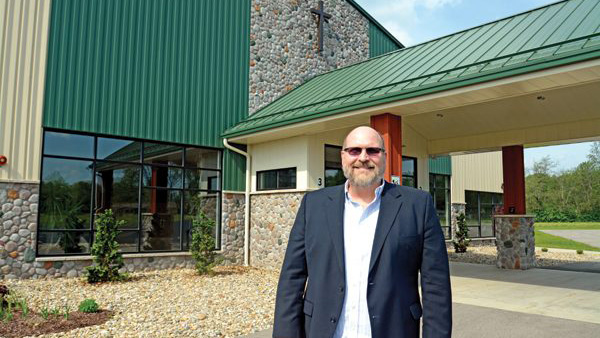 Mike Smith stands outside Hope Community Church, 2390 Lake St. in Niles. Smith will be retiring next year after leading the church for 18 years. (Leader photos/KELSEY HAMMON)

NILES — After 18 years of serving the congregants at Hope Community Church, founder and pastor Mike Smith will be retiring, due to health issues.

Smith made the announcement last week following a knee surgery and some other mounting health issues that he said have made working a full day difficult.  Smith’s last day will be Jan. 7. At the time, a candidate has not been identified to take his place as pastor.

“Now is time to retire,” Smith said. “I just don’t have enough in me to keep going.”

Smith has battled health issues for a number of years. Some of the issues stem from an injury he sustained in the Navy in 1986, when he fell in an aviation fuel tank, herniating some discs in his back. He also suffers from a heart conditions, worsened by stress from the job.

Despite facing these health issues, Smith still worked to build a church that would serve the community of Niles, though his path to leading a congregation was not so clear cut. Smith’s father, Ron Smith, was a Baptist preacher, but that did not mean he grew up liking church. In fact, Smith has said in earlier interviews that it was not an experience he enjoyed. Smith battled drug and alcohol addiction starting early in his youth.

Smith eventually returned to the church, where he felt he had a new perspective on life that motivated him to lead his own parishioners.

When Smith first founded Hope Community Church in 1999, congregants did not have a home base and would meet to worship in residence’s basement, garage or a school. Looking back on his career as a pastor, Smith said he is proud of his ability to grow the congregation from its humble beginnings. In 2002, he purchased 20 acres of land at 2390 Lake St. and built a church with room for 1,500 worshippers.

“It has been awesome to watch us grow from a basement to where we are at now,” Smith said.

At the foundation of his church, Smith said he worked to inspire others to do more than worship and he advised the organization’s next leader to continue this legacy.

“Stay connected to the community,” Smith said. “That is the key to any church being successful. [You] don’t want a place where people just go and sit for an hour.”

During his time as pastor, a church congregant helped to serve the community with a food pantry, which was operated out of his own home. The food pantry was supported so well that eventually there was no room for the donations and the church started giving the food to Feeding America — a program where residents in need fill a shopping cart with groceries once a month. The church has continued to offer their parking lot to host the program. They have also partnered with Trinity Episcopal to offer free meals to the homeless on Saturday.

Working with the schools has also been a focus. Smith said each year they buy gifts for underprivileged children for Christmas. Last year, they were able to distribute more than 300 presents to families in need.

The church has also been an active supporter of the Pregnancy Care Center. In 2008, the donated $10,000 to the organization which offers classes, clothing and food to parents in the community.

Those who attend Hope Community Church were sadden to hear that Smith is retiring, he said.

“Most were pretty shocked and saddened by the news,” Smith said. “It almost felt like a funeral.”

Despite his retirement, Smith said he is happy to have founded something that can continue to serve his community.

“I feel like I have been part of something beautiful that Niles did not have been before, so it has been a good ride,” Smith said.

MILTON TOWNSHIP — Three people were injured in a collision in Milton Township on Christmas Eve, according to the Cass... read more