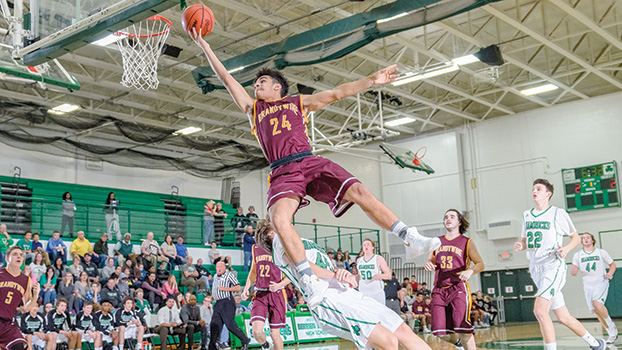 BERRIEN SPRINGS — Even though it was not the prettiest win, the Brandywine Bobcats managed to fend off host Berrien Springs Shamrocks 45-41 and moved to 4-1 on the young season.

Both teams combined for 44 turnovers in the BCS Red Division game, but it was the 55 field goal attempts for the Bobcats that turned out to be the difference.

From the beginning, Brandywine used a full court press, forcing the Shamrocks to nine turnovers in the opening quarter, opening up the contest to an early 7-2 lead.

Unable to continue to capitalize on the Shamrock turnovers, Brandywine’s shot selection started to dig it into a hole.

Berrien Springs went on an 8-0 run to end the first quarter.

Brandywine’s Bryce McLane gave the lead back to the Bobcats hitting his first of four 3-point baskets with 5:25 left in the first half.

However, Berrien Springs managed to reclaim the lead back and hold on to a very slim 19-18 advantage at the halftime.

Brandywine (2-1 BCS Red) struggled to make a shot until 4:31 left in the third quarter when Jordan Abrams sank a free throw. Soon after, junior Jaden Croom gave the Bobcats the lead at 22-21.

Although Berrien Springs kept it close and even tied the game multiple times, Brandywine never trailed the rest of the game.

“We kept letting them hang around,” Knapp said. “When you are on the road you have to hit the free throws.”

Croom added another basket with two seconds left in the third quarter to increase the Bobcats’ lead 30-27.

“All of our guys can shoot lights out,” Knapp said. “But when you settle and not crowd the paint with the ball to Croom and (Toby) Latisaw it can be a long game. In the second half we started to move the ball better against the 3-2 zone.”

Attempting to claw their way back, Berrien Springs came up short when Croom was able to grab an offensive and score off an Abrams missed free throw.

Brandywine will be off the remainder of the year before returning to the court Jan. 5 to face Coloma in a non-conference contest.

The Bobcats got off to a great start, scoring 24 points in the opening quarter, but only managed four points in the second to lead 28-17 at halftime.

The Bobcats hit a trio of 3-pointers in the fourth quarter.

Zikayyah Abdullah and Madison Bailey both scored 14 points to lead Brandywine, which is now 6-1 overall and 3-1 in the Red Division.

Brandywine is back in action Jan. 5 when it hosts Coloma in a non-conference contest.