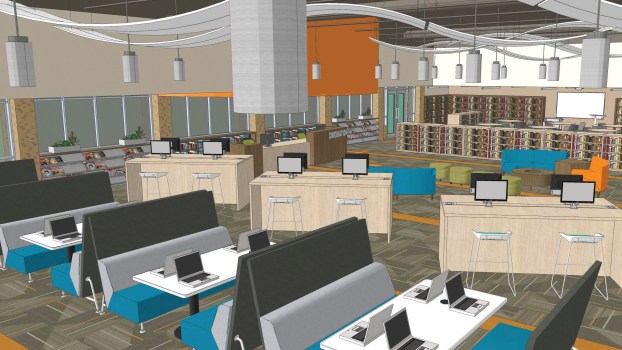 District to begin next phase of Union High renovations

DOWAGIAC — While local students enjoy their midwinter break between Christmas and the New Year, crews responsible for the ongoing transformation of Dowagiac Union High School will keep on keeping on.

Next week, contractors with the $16 million construction project are expected to make the finishing touches to the current phase of work in the school’s math hallway before turning their attention to the building’s media center, located on the east wing of the high school. The work will take several months to finish, with an estimated completion date sometime in middle to late March, said Dowagiac Union Schools Superintendent Paul Hartsig.

In anticipation of the upcoming construction, members of the Dowagiac Union Schools Board of Education voted to purchase more than $74,000 worth of new furniture and furnishings for the redesigned media center. The fixtures — which include chairs, tables, desks and bookshelves — are expected to take around 14 weeks to arrive, around the time when crews are expected to wrap up construction on the room, Hartsig said.

As with all other expenses related to the high school renovations, the money spent on the furniture is funded by $37 million pair of bonds approved by voters in 2015. This money is used to pay for not only the ongoing transformation of Union High, but also for planned overhauls to the district’s four elementary buildings and Chris Taylor Alumni Field.

The high school media center will be completely transformed over the next several weeks, Hartsig said.

The room will feature new glass panels that will run along the wall facing the hallway, complemented by the windows facing the courtyard on the opposite side. One side of the redesigned space will consist of several small conference rooms for students or staff to work, while on the other end will be a small space for instruction. The circulation desk will be moved toward the center of the room, with several tables and chairs for students to use to study.

“It will be a really nice, beautiful, usable place for students to work and learn,” Hartsig said.

During construction, all the books and reference materials currently housed in the media center will move to the choir room on the other side of the school, Hartsig said.

Following the media center renovations, crews will turn their attention toward improvements to the kitchen area. After classes let out for summer, the district will focus on renovations to the school’s science rooms, cafeteria and front office area, as well as construction of the new secure entry area, similar to the one in place at Dowagiac Middle School, Hartsig said.

During that same period, work will continue on the new competition gym on the high school’s west end, which is expected to be open for fall sports by the beginning of the 2018-19 school year, Hartsig said.

“When the kids return in September, a huge chunk of work will be finished,” he said.

Next month, district leaders are expected to open bids for the elementary construction projects, beginning with Kincheloe and Sister Lakes, followed by Patrick Hamilton and Justus Gage. Renovations are expected to begin in May for the projects, with work taking place through fall 2019, Hartsig said.