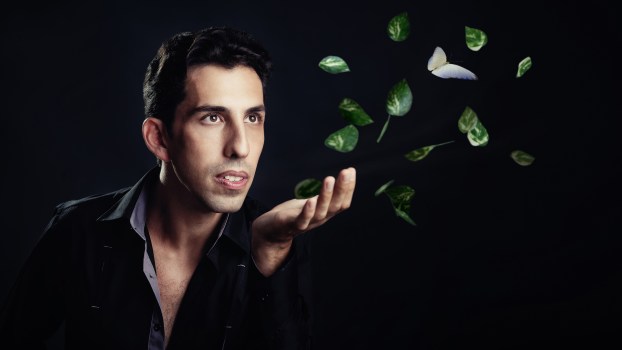 ‘Vitaly: An Evening of Wonders’ to take place Feb. 16 at Mendel Center

BENTON HARBOR — Faces that disappear from drivers’ licenses. Paintbrushes that paint on their own. Photographs that literally come to life before an audiences’ eyes.

This February at the Mendel Center there will be a whole new take on magic with “Center with Vitaly: An Evening of Wonders.” This family-friendly performance is slated for 8 p.m. Friday, Feb. 16.

Vitaly is a world-class illusionist who has mystified fans from all over the world, including Las Vegas superstars Penn & Teller, whom he successfully fooled on their hit TV show, Fool Us. From bringing pictures and drawings to life to erasing people from their own driver’s licenses, Vitaly’s signature illusions seek to leave even the most jaded audience awestruck.

Reputed as “one of the most captivating and enjoyable illusionists performing in the world today” (Chilliwack Progress), Vitaly aims to breathe innovation and artistry into the field of magic. He is known for having invented and designed all of his illusions, treating spectators to a unique theatrical entertainment experience. Not only do they witness the elegant rendering of the impossible, they are charmed by Vitaly’s engaging personality.

Now based in Vancouver, Vitaly has garnered rave reviews from CBC, The Vancouver Sun, and The Province, which has crowned him “the master of his own magical domain.” He continues to amaze people all over the world.

Vitaly was 14 when he discovered his passion for magic. Soon, he was entertaining his friends and family with material he developed himself. Years later, he would abandon a career in engineering to focus on rebuilding people’s childlike sense of wonder and bridging the gap between dreams and reality through illusions.

Vancouver Weekly reviewed Vitaly and wrote, “There’s a tendency to call our era the ‘seen-it-all’ times. It’s hard to imagine that one man on a stage could offer much that we haven’t seen. But — with the help of our imaginations, and his — he does.”

Tickets for “Vitaly: An Evening of Wonders” are on sale at TheMendelCenter.com, through The Mendel Center Box Office at (269) 927-8700, option 1, and in person weekdays from 10 a.m. to 6 p.m. at the box office located in The Mendel Center at Lake Michigan College, 2755 E. Napier Ave., Benton Harbor. Discounts are available for seniors, students and children, active military members, and veterans.

Groups of 10 or more receive discounts when orders are placed through The Mendel Center Box Office or online.

VIP Experience packages are limited and cost $25. The package includes access to a private reception area before the show and during intermission, appetizers, a complimentary alcoholic or non-alcoholic beverage, and door prizes. After the show, VIP Experience ticket holders will have their photo taken with Vitaly during an exclusive meet and greet event. Show and VIP Experience tickets are sold separately.

Vitaly: An Evening of Wonders is part of The Mendel Center’s Discovery Series. The performance is sponsored by Chemical Bank, Holiday Inn Express & Suites – St. Joseph, and 98.3 The Coast, and has been made possible in part by the Gast Young People’s Performance Endowment.