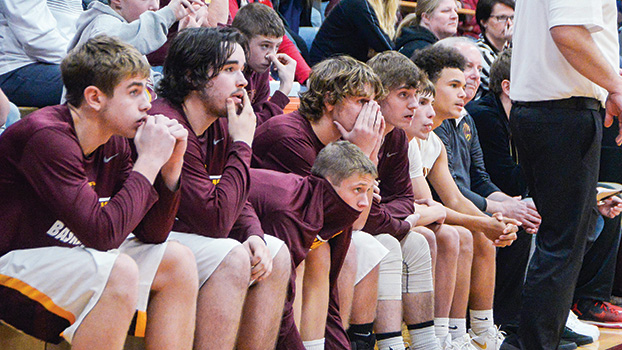 NILES — A joint offensive effort by Shane Brown and Derrick Miller in double overtime was the spark the Brandywine boys basketball team needed in its 49-44 win over Bridgman Friday night.

In a contest where the Bobcats led for most of the night — but never by more than four points — Brown and Miller combined for five points out of the gate in the final four minutes.

Jordan Abrams’ point from the free throw line boosted Brandywine to a 46-40 advantage in the final minute of the game.

But it was Brown’s center-court steal and successful layup with 21 seconds left that put the icing on the cake for the Bobcats.

“Shane and Derrick came up strong for us in that last overtime,” said Brandywine coach Nate Knapp. “They were finally able to nail the shots when we needed it.”

Shooting was the biggest struggle for both teams all night, as one shot after the other failed. The Bobcats went just 43 percent from the field, while the Bees were 64 percent.

Abrams, who had ended each game far in double digits so far this season, was held to only four. Brandywine’s 6-foot-5 center Jaden Croom had a game high 15-points, but coach Knapp said even he was way off.

“We go into one game and nail every shot,” he said. “And other games, we can’t even make layups. Right now, our big problem is inconsistency with shooting, which is something we can’t have, especially on the free throw line. If you look at the shooting for both teams, it’s like neither one of us wanted to win this game tonight.”

The two teams found themselves in overtime after ending the fourth tied at 37.

Bridgman’s Matt Harazin’s basket with 3:12 remaining was the last time either team would score in regular play.

Bridgman led Brandywine 33-29 after the third  quarter, and the Bobcats led in the first and second quarters 12-10 and 21-17.
The Bobcats, now 3-1 overall and 1-1 in the Red Division, will host Berrien Springs on Friday for another division contest.

Megan Schmidt and Zakiyyah and Malikiyyah Abdullah each had a trio of 3-pointers for the Bobcats, who improve to 4-1 overall and 2-1 in the division.

Brandywine led 19-6 after the first quarter, entered halftime with the 36-19
advantage, and ended the third quarter up 44-24.

Coach Josh Hood said he is happy with the win, but still has a lot to work on with his group.

“We are very inconsistent playing a 32-minute game,” he said. “Sure, we had a 24-point win, but the effort has to be there the entire game, and it still isn’t. We won’t go very far in March madness on inconsistency, so that’s what I, as a coach, will really be working on in the coming weeks.”

Brandywine will head to Berrien Springs Thursday for a 7:30 p.m. Red Division game.