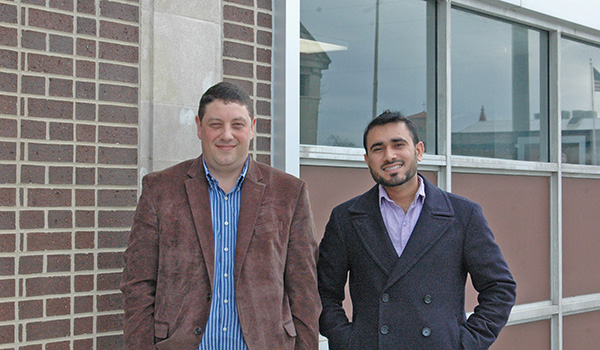 CASSOPOLIS — Two Michiana residents are looking to bring a new type of industry to the village of Cassopolis.

Though the pair has their sights set on many locations, including Niles and Kalamazoo, they formally presented their plans to potentially open a dispensary in downtown Cassopolis and a grow operation in the industrial park to the Cassopolis Village Council on Nov. 27.

Now, they are in a waiting game to see if the village will adopt medical marijuana-friendly ordinances, they said.

The medical marijuana business that Zinzuvadia and Campbell want to open will be called Zaad.

Zinzuvadia said he sees medical marijuana as a logical next step of the vape industry that he has been involved in for years.

His vision for Zaad is as a high-end “club,” which will serve all organic products. As “zaad” roughly translates to “tree of life” in Zinzuvadia’s native language, he said that, right now, he and Campbell are planting the roots of their medical marijuana business, and that each branch of their growing business will be a community where people can find health and healing.

“Medical marijuana is the next booming business,” Zinzuvadia said. “When I go into a business, I always have a goal and a purpose. The goal of any business is to make money, but the purpose needs to be higher. The business needs to be that you are helping, some way, somehow in the community.”

Zaad would help residents by providing a need to the estimated 1,300 medical marijuana card holders in Cass County, Zinzuvadia said.

Though Campbell and Zinzuvadia predict the area will be flush with medical marijuana dispensaries once municipalities pass medical marijuana ordinances, they feel they will be able to provide a higher standard of product and care than many of their competitors.

“We will push the boundaries, get it to the right level, get the right information to the patents,” Zinzuvadia said. “I think we have to be in the industry [to make those things happen]. We will be the final frontiers of medical marijuana.”

The business partners see Cassopolis as the perfect place for their business due to its central location in Cass County. In addition, Cassopolis’ rural nature will make it a good area for a grow operation.

“Cassopolis is the perfect location,” Zinzuvadia said. “The next closest place you can go right now for a dispensary is Kalamazoo. [A dispensary in Cassopolis] will serve the purpose of convenience and a high-end product, right in your neighborhood.”

For Cassopolis’ part, leadership said that time will tell whether or not the village will adopt medical marijuana ordinances.

“I don’t know that we have a position [on medical marijuana] yet,” said Village Manager Emilie Sarratore. “I don’t know if the decision to [opt in or opt out] will be made quickly.”

Sarratore and the council also plan to go over the emergency rules released by the state earlier this month.

“I don’t think the council [at the meeting where Zinzuvadia and Campbell presented their plans to the council] felt they had enough information to know what they felt about [medical marijuana] yet,” Sarratore said. “They wanted to have another discussion about it. A lengthy discussion.”

Despite their optimism that their plan in Cassopolis will work out, Zinzuvadia and Campbell are aware that they are relying on the decision of the village council. Should Cassopolis opt out of allowing medical marijuana operations within its limits, the pair said they will look elsewhere to grow their business.

“There are still a lot of questions about how much processed product will be available, and what the timeline will be for [medical marijuana] companies to get up and running,” Campbell said. “There are probably more questions than answers at this point.”

A group credited with helping to pioneer doo wop music chose Niles as the backdrop for “A Very Merry Doo... read more