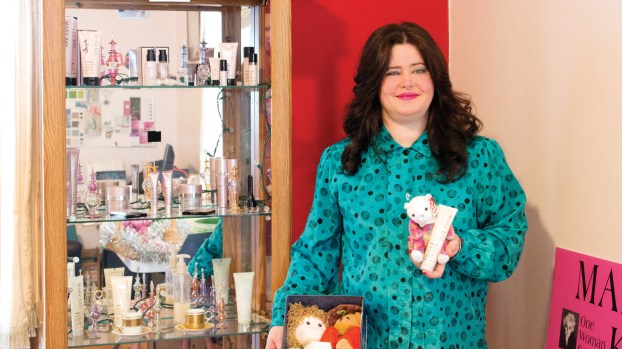 Dowagiac’s Kimberly Vanderbelt shows off a stuffed animal inside her home Monday morning. She will be gifting it and other items to local nursing home residents through her annual “Adopt-a-Grandparent” program later this month. (Leader photo/TED YOAKUM)

Dowagiac woman to donate gifts to elderly for Christmas

DOWAGIAC — While she may have little resemblance to bearded man from the North Pole, one could easily mistake the dining room inside Kimberly Vanderbelt’s Dowagiac home as a tiny version of Santa’s workshop.

With a pile of cuddly stuffed animals on end of the table and rolls of festive green and red gift-wrapping paper on the other, the local woman has used the room as the operation center of her mission to bring some Yuletide joy to others in The Grand Old City. With a den full of neatly-wrapped presents in the room behind her, Vanderbelt and several volunteers have spent the last several days preparing gift boxes for the lucky people on her Christmas list.

“Who wouldn’t love to get this as a gift for Christmas,” Vanderbelt said, while holding up white teddy bear, clad in a miniature tie-dye T-shirt with a tube of Mary Kay lotion grasped between its furry paws, inside her makeshift workshop Monday morning.

Unlike Santa, however, Vanderbelt and her helpers will not be sending their gifts out to the good little boys and girls out there in the community. Instead, they will be donating the fruits of their labor to some special grandmas and grandpas living in the greater Dowagiac area.

The lifelong Dowagiac resident is currently raising money for her fourth annual “Adopt-a-Grandparent” gift drive. For $20, businesses or private individuals may sponsor a gift box, with stuffed animals, therapeutic pillows and Mary Kay cosmetic products, that will be donated to residents living at Dowagiac’s The Timbers of Cass County or Chalet of Niles nursing homes.

The finished gifts will be donated to residents later this month for Christmas. Helping Vanderbelt distribute the gifts will be her son, Mathew, and her grandchildren, who will dress up like elves to deliver the presents, she said.

“To see [the residents’] faces light up with excitement when they get their gifts is incredible,” Vanderbelt said when she recalled her previous visits to the Dowagiac nursing home.

The Dowagiac Mary Kay saleswoman first began organizing “Adopt-a-Grandparent” four years ago, after she was inspired by a similar effort from another Mary Kay representative in the county, she said. Vanderbelt said that the gift drive gives younger people in the community a chance to “turn the tables” on the older generation, who spent most of their lives buying gifts for children, grandchildren or other members of their family before they began living in an assisted care facility.

“Some residents don’t get presents, or even receive any visits during the holidays,” Vanderbelt said. “So, when they do get something for Christmas, it makes them feel like they are still part of the community, that someone out there still cares about them.”

For the previous three years, Vanderbelt has focused on providing gifts just to residents of The Timbers, she said. However, this year she would like to expand her efforts to Chalet of Niles, and possibly other nursing homes in the area in the future.

Vanderbelt and several volunteers helping her have received support from 85 donors since they began their fundraising efforts near the end of October, Vanderbelt said. She and others will continue to raise money for gifts through Dec. 24, she said.

“Just do what you can do to help,” she said. “If you can’t help this year, that’s OK. I will be here again next year.”

NILES — For the past year and a half, customers that visited downtown Niles’ Resurrections Unique Home Furnishings could find... read more