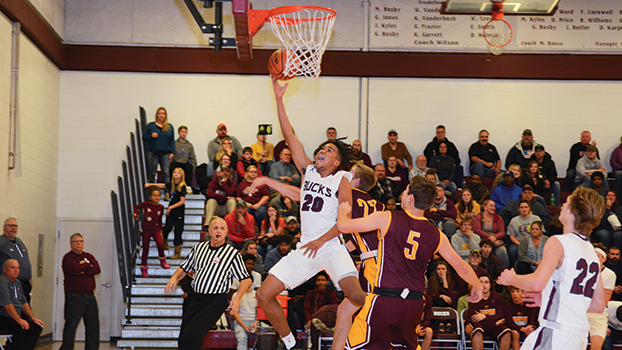 Buchanan’s Carter Jeffries (20) goes up for two of his 10 points against Brandywine. (Leader photo/SCOTT NOVAK)

Buchanan edges Bobcats at the buzzer; Niles improves to 2-0

BUCHANAN — It was a roller coaster of emotions for the Buchanan and Brandywine boys basketball teams as they renewed their rivalry, Friday night.

The Bucks (1-1, 1-0 BCS Red) jumped out to a 21-5 first-quarter lead and appeared to be on their way to an easy BCS Athletic Conference Red Division victory.

Buchanan led by as many as 17 points early in the second half before Brandywine turned up the defensive pressure and rallied.

Forcing the Bucks into numerous turnovers and scoring in bunches, the Bobcats (1-1, 0-1 BCS Red) had whittled the lead down to 44-34 heading into the final quarter.

The comeback continued throughout the final eight minutes, with Brandywine finally taking its first lead since it was 2-0 to start the game after shooting a pair of technical four free throws, on a Shane Brown basket with 1:29 remaining.

Over the final 90 seconds, the teams would trade the lead four times, with the Bobcats grabbing a 61-59 lead following the Bucks’ 10th turnover of the fourth quarter and score by Bryce McLane, who was fouled on the play.

Before McLane could shoot the free throw, though, the Bobcats’ were hit with a technical foul, which gave the Bucks a chance to tie the score.

Austen Taylor hit one of two free throws to cut the lead to 61-60.

On the ensuing inbounds play, Buchanan was able to get to the rim on a drive by Chris Young, who scored the game-winner with 4.5 seconds remaining.

“We have up too much penetration and at the end that is what killed us,” said Brandywine coach Nathan Knapp. “We are going to learn from this. We have got a target on our backs. We think we are a good team. We have just got to put it together.

Brandywine was led by Jordan Abraham’s game-high 21 points, all of which came in the second half.

Gabriel Gouin added eight points and Derrick Miller seven points for the Bobcats, who travel to Fennville for a non-conference contest Tuesday night.

The Bucks were led by Young’s 18 points, while Taylor finished with 16 points and Carter Jeffries 10.

PORTAGE — Robert Brown scored 15 points and grabbed 10 rebounds as Niles improved to 2-0 overall and 1-0 in the SMAC West Division with a 54-44 victory over host Portage Northern Friday night.

The Huskies, who trailed Niles 44-29 heading into the fourth quarter, outscored the Vikings 15-10 to make the final score a bit more respectable.

OTSEGO — Visiting Dowagiac exploded for 20 points in the fourth quarter to pull out a 66-60 Wolverine Conference non-divisional... read more