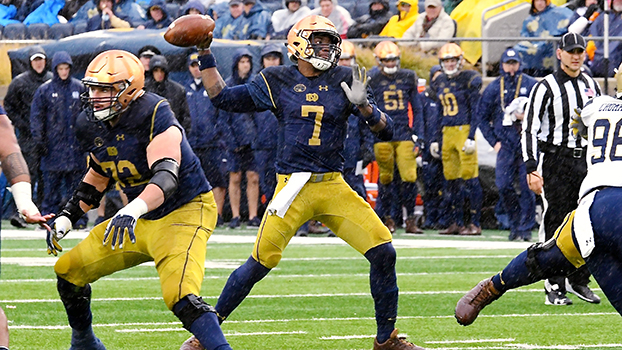 Notre Dame quarterback Brandon Wimbush and the Irish offense will be working on its passing game before taking on LSU in the Citrus Bowl on Jan. 1. (Leader photo/KELLY SWEENEY)

After going 9-3 in the regular season, the Notre Dame football team will travel to Orlando, Florida for the Jan. 1 Citrus Bowl.

The Fighting Irish will face LSU in the Citrus Bowl, which will be seen on ABC beginning at 1 p.m.

The Tigers, who are also 9-3, have one of the country’s top passing defenses.

The Fighting Irish have struggled this season throwing the football, so a chance to work on that part of the game before facing LSU will go a long way toward helping out Notre Dame for the 2018 season.

“It’s really about getting into a consistency of rhythm and throwing the ball on time,” Notre Dame coach Brian Kelly said Sunday following the announcement of the bowl games. “And we’re going to have to work on that over the next couple of weeks and get into some form of consistency in the passing game that allows us a little bit more success in throwing the football.”

This will be the 12th meeting all-time between the Fighting Irish and LSU.

This will be the first meeting between the two teams since 2014.

Notre Dame leads the series 6-5 with the last meeting being in the 2014 Music City Bowl in Nashville, Tennessee when the Fighting Irish edged the Tigers 31-28 on a field goal.

“Outstanding athletes, physicality up front — certainly LSU’s known for that — a great running back, and they’ve got another one now in (Derrius) Guice,” Kelly said of the Music City bowl meeting. “They fit that profile of an SEC team with great skill on the back end, can play man, their front seven is outstanding. And offensively I think Matt Canada has done a nice job diversifying what they do offensively now and Dave Aranda is one of the best defensive coordinators. Ed’s got a great staff, he’s got great talent, and they’re playing really great football. It’s a different team from that 2014 team obviously, but the talent is still there.”

LSU’s last win against the Fighting Irish came in 2006 as the Tigers won 41-14 in the Sugar Bowl.

“We’ve had a matchup with them before and we know what to expect, one of the top teams in the country,” Kelly said. “I think it’ll make for great New Year’s Day football, and again, I think our fan base (and) LSU’s fan base will travel in force to see this matchup between two nationally ranked teams.”

“You have the utmost respect every time you play Notre Dame,” he said. “It’s going to be a physical game, it’s going to be a war, but we’re looking forward to playing in it. I have a lot of guys that are excited, it’s a tremendous challenge, and with a tremendous challenge the guys are going to practice harder and practice better and we’re looking forward to the game.”

Notre Dame is playing in the Citrus Bowl for the first time. The Fighting Irish are making their 36th overall bowl game appearance.

The Fighting Irish are making their seventh bowl appearance in eight seasons under Kelly.

The University of Michigan will travel once again to the state of Florida to play in a bowl game.

This year, the Wolverines (8-4) will play in the Jan. 1 Outback Bowl against South Carolina.

Kickoff is slated for noon at Raymond James Stadium, the home of the Tampa Bay Buccaneers.

This will be the fourth meeting between the Wolverines and the Gamecocks, who are 8-4 as well.

The Wolverines lost to the Crimson Tide in 1997 and to South Carolina in 2013.

“We are honored to represent our University and the Big Ten Conference in the tradition-laden Outback Bowl in Tampa,” Michigan coach Jim Harbaugh said. “Our players and staff are excited to face an excellent SEC opponent in South Carolina and look forward to the competition on New Year’s Day.”

The Wolverines will be playing in their 46th bowl game, which ranks 11th in NCAA history and Michigan is 17th in bowl game victories.

This will be the Wolverines’ 16th Jan. 1 bowl game.

It may not have been the bowl that Michigan State was hoping for, but the Spartans are excited to be heading west to take on Washington State in the Holiday Bowl.

The Spartans, who are making their first-ever appearance in the Holiday Bowl, will be playing in its 10th bowl game in 11 years under head coach Mark Dantonio.

“Facing Washington State will be a tremendous challenge,” Dantonio said. “They have beaten USC, Stanford, Boise State and Oregon. They consistently have one of the top passing offenses in the nation every year (currently ranked No. 2 in the FBS), but they also have one of the top defenses in the nation as well (No. 15 in FBS). It will certainly be a difficult task for us.”