No. 1 Bronson knocks Brandywine out of tournament 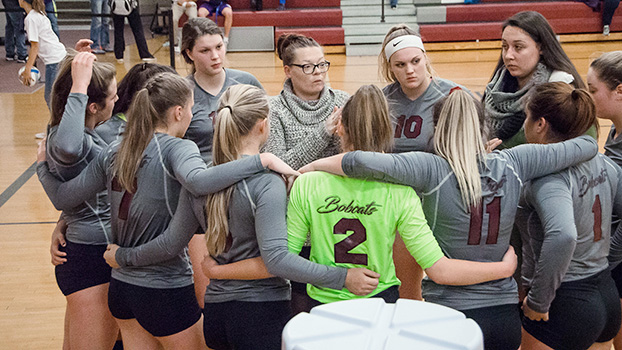 WATERVLIET — It’s the end of the road for the Brandywine volleyball team.

The Lady Cats fell to top-ranked Bronson, 3-0, Tuesday night in a match that lasted roughly 45 minutes.

Brandywine was first to take the lead in regional semifinal play, jumping to a quick 2-0 lead in game one.

After that, the Bobcats fell flat until the midway through the third set.

It was evident on the court that Brandywine was out of it is game, especially in the first and second set. Head coach Janet Markunas admitted this was not the team she has seen this year.

“I’m not really sure what happened tonight. We couldn’t do anything. The few big breaks we did get, we lost the momentum and never regained,” Markunas said.

Even Bronson head coach Jean LaClair was surprised by the Bobcats’ performance.

“That wasn’t the team I was expecting to see. They are definitely better than what they showed tonight,” she said. “We just had a game plan that neutralized their good hitters and we took advantage of their mistakes.”

The Vikings halted any hitting game Brandywine had. Senior Grace Polomczak, who has had double-digit hitting almost every game this season, was left with just four kills on the night.

The only real momentum Brandywine had was in the third set. Big hits, ace serves and an overall look of team play finally shined. But it was too little, too late.

“I’m not upset,” she said. “I wish we would have played our game tonight because that scoreboard would have been a lot different. But we had a great season, we have a tremendous group of girls and I’m happy everyone back except two players so next year, so we’ll be back for another great season,” Markunas added.

The Bobcats lose seniors Polomczak and Lauren Srmek. Polomczak will end her final season with an impressive 437 kills. She added 448 digs and 78 aces to her stats.

“Lauren played right side for us and did such a great job this year. She had several big plays throughout the season. Grace was my go-to player. She’s one of the best in the area. I’m hoping a few of our players will step up and be a force like has been for us,” Markunas said. “I’m going to miss them both. They’ve been great and made my first year as head coach a very memorable one.”

Brandywine ends its season with a 39-9-0 record.

Bronson advances to Thursday’s regional championship game, where it will face Schoolcraft at 7 p.m. in Watervliet.