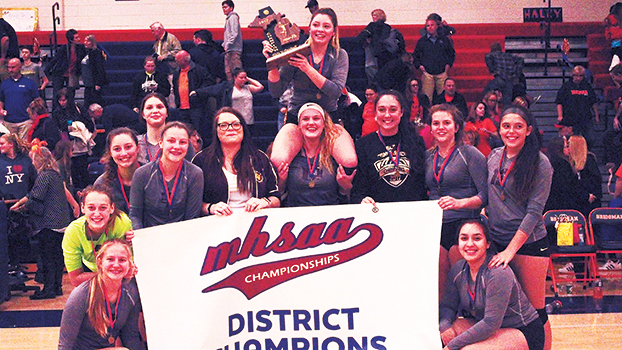 BRIDGMAN — From the start of the 2017 season, Brandywine’s volleyball team has had one goal: to meet up with Bronson in the playoffs.

That goal was achieved Friday night, when the Bobcats were crowned Class C District champions, which advances them to the regional semifinals to meet the No. 1-ranked defending state champion Vikings Tuesday.

“I’ve said it since day one and so have our players — we want to meet Bronson. That was our biggest goal and, well, here we go,” said first-year varsity head coach Janet Markunas after Friday’s win.

Battling the on-set of a seasonal illness, senior captain Grace Polomcak was all business as she led Brandywine with an impressive 20 kills and 20 digs. Freshman Kylie Myers was another force at the net for Brandywine, adding 12 kills and six blocks to the stats.

Another freshman, Kristen Alvord, had three aces and 11 digs for the Bobcats. Both freshmen earned high praises from Markunas.

“My freshmen came alive tonight, especially in that last game. Kristen and Kylie don’t play like freshmen. They’re tough and they play their positions well. I am so proud of them and their hard work tonight,” Markunas said.

Another key in Brandywine’s victory was setter Audrey Longley, who ended the night with 41 set assists and three aces.

Markunas described Longley as “excellent. She is fantastic. Her serves, her sets, she’s so smart on the court. She is just awesome.”

Nichole Sachman was yet another beast on offense for Brandywine, knocking down 11 kills and defending with 15 digs and Bethany Duval ended with 15 digs for the night.

“We had some errors tonight,” Markunas said. “Some really big errors that hurt us bad, but this team is a roller coaster ride. They’ve been that way all year. We get down five, seven, 10 points, but we come right back. That’s the joy of this team. They don’t get down. They fall into slumps, but they find their way back out fast.”

But slumps are not something the Bobcats can afford heading into Tuesday night’s game against top-ranked Bronson. In fact, there is little room for error.

The Vikings have claimed the Class C state title for the last two years. They are led by senior setter Kiana Mayer, who was named one of 10 finalists for the prestigious Miss Volleyball award, given to the top senior volleyball player in the state.

“All I’ve heard about is Bronson all year and as a freshman I didn’t get it at first. But now I know and we will be working extra hard in practices the next several days. I’m ready for what’s next,” Myers said.

The match will begin at 7:45 p.m. on Tuesday in Watervliet.