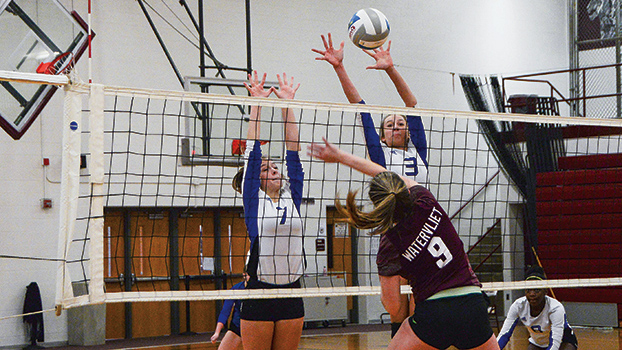 On Monday, the Rangers saw ball after ball fall in their favor, and for most of the match, the momentum was spot on.

Despite a few hiccups, Cass claimed the win in four sets over host Watervliet.

The Rangers opened play with a 25-22 victory. They fell in set two, 25-21, but bounced back to win 25-21 in set three and sealed the deal with a nail-biting 25-23 win in set four.
Angel Gary blasted the game-winning point over the net for Cass in game four, which resulted in the entire team tackling her in celebration. After a few moments of cheers and hollers, it was clear Gary was injured.

During the after-game interview, head coach Demi Schrader paused to run to her side after noticing something was wrong. Teammates carried her to the bench, where it appeared her knee was the problem.

“We don’t need a scare like that right now,” Schrader said as she resumed the interview. “They just celebrated a little too hard and she was stuck at the bottom of the pile. She’ll be alright.”

Schrader said the winning hit was huge, especially because Gary had struggled most of the night with scoring.

“She just had an off night and was having a hard time finishing those hits, but she came in clutch there at the end and finally put the ball in at a time when we needed it most.It was huge,” Schrader said.

Sophie Fiala and Maile Barber also had big nights for Cassopolis as both players had 13 kills. Fiala added eight blocks on defense.

Cassopolis, now 21-17-3, will face Brandywine Wednesday night in the semifinal contest at Bridgman High School. Game one is set for 5:30 p.m.

“Last time we played Brandywine we had a hard time with their blocking and finding open spots. But we’ve improved a lot since then and our girls have become more aggressive at the net and finding the open areas. I’m excited to meet them again,” Schrader said.

The Rangers fell to the Bobcats in two sets back on Sept. 30.