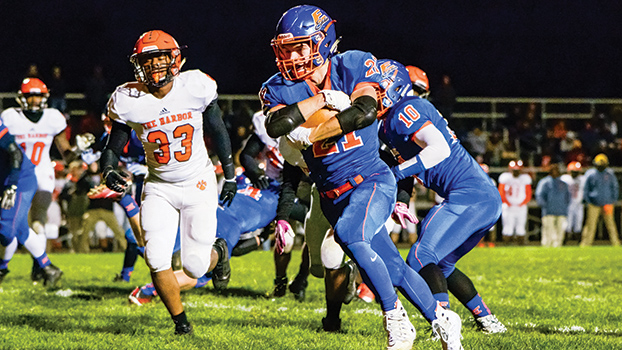 Edwardsburg’s Nick Bradley (21) heads to the end zone against Benton Harbor in the Eddies’ 41-0 win over the Tigers in the opening round of the Division 4 playoffs Friday night. (Leader photo/TIMOTHY RITTER)

Edwardsburg shut out the Tigers on its home turf, 41-0, in a game that was entirely unexpected by both head coaches.

Eddies coach Kevin Bartz said he prepared his team for a battle until the end, but instead was able to end with a running clock for most of the fourth quarter.

Edwardsburg broke the game open with its first touchdown just two minutes into the game when the first of many plays by the dominant duo of Kyle Shrider and Nick Bradley began. Shrider ran the ball in from the 7-yard line and Bradley added a touchdown at the 4:41 mark from 12 yards out to put the Eddies up 12-0. Both two-point conversions were unsuccessful.

Shrider added a 33-yard touchdown 1:23 into the second quarter to give him two touchdowns for the night. He also ran into two successful two-point conversions and had a total of 140 rushing yards on offense. On defense, he had five tackles.

Bradley ended the night with 152 yards rushing and five tackles on defense.

“Kyle is one of those kids who becomes more intense and more of a dominant player the later in the season we get. He and Nick are two who really step up for us and play well, especially in these big games,” Bartz said.

Edwardsburg received two additional touchdowns from Isaiah Mitchell, who caught a 19-yard pass from quarterback Matt Hepler at the 5:00 mark of the second quarter to put the Eddies up 26-0 at halftime. Mitchell also had a 1-yard run in the fourth, which prompted the running clock.

Chase Sager added an 8-yard touchdown run at 3:09 in the third.

The Tigers struggled offensively all night. Their biggest drives of the game came in the third and fourth quarters. In the third, they ate up four minutes, 15 seconds of the clock with 16 drives. The 17th drive ended on the 1-yard line when Darrius Clayton threw the ball to a teammate in the end zone. However, the play was called for being past the line of scrimmage. In the fourth, they held onto the ball for 8:40, but still couldn’t utilize that time to score.

Benton Harbor ended the night with just 137 offensive yards, eight penalties, went 3-for-12 on passing and end the season 5-5.

The Eddies, now 9-1, return to action on Friday, when they host Three Rivers, a team that handed them their only loss of the season. The Eddies fell to the Wildcats back on Oct. 6, 21-18 on their home field.

“Three Rivers played us very, very well the last time we played. We’ve been planning on possibly seeing them in the playoffs, so we’ll be ready,” Bartz said.