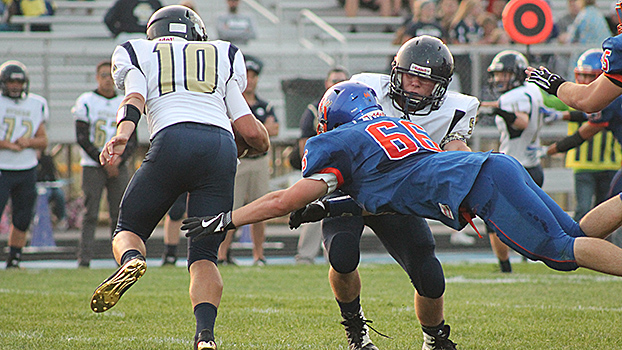 EDWARDSBURG — A second straight week of fall-like weather meant a packed house for Edwardsburg in its 2017 home opener Thursday night.

Edwardsburg improved to 2-0 on the season and in the Wolverine Conference with a dominating 72-0 victory over the winless Bulldogs.

The Eddies have now outscored their first two opponents 134-8.

The Eddies’ defense started strong, forcing Otsego into a three-and-out.

Their ensuing drive started at their own 41-yard line. Four straight runs, with a penalty mixed in, saw the Eddies score on a 31-yard run by senior running back Nick Bradley.

Edwardsburg enforced another three-and-out, and after a 35-yard punt return setting itself up on the 24-yard line, the Eddies scored in two plays, one being a 7-yard run by junior Chase Sager.

The Edwardsburg defense kept Otsego in check, blanking them on the scoreboard throughout the half.

On the flipside, the Eddies’ offense scored on every possession, tallying 56 points in the first half, with the majority of their second-team offense playing in the second quarter.

Sager led the Edwardsburg offense with three scores on the ground in the first half. Bradley, Mac Gaideski, Isaiah Mitchell and Caden Goggins each added a touchdown on the ground as the Eddies entered the half with a 56-0 lead.

The second half was more of the same. However, a running clock helped Otsego limit further damage.

Bradley took the opening kickoff for the Eddies down to their own 10-yard line and junior Grant Gilmore scored on a six-yard run two plays later.

The defense held the Bulldogs on a fourth-and-6 attempt on a pass breakup from junior Parker Szlanfucht.

The Eddies then went on an eight-play drive, all runs, capped off with a 1-yard touchdown run by senior Cullen McIntee.

The game ended on Otsego’s final drive, as it finally looked as if the Bulldogs would find the end zone after a defensive pass interference call on the Eddies put the ball at the 16-yard line.

Quarterback Jaekob Sallee lobbed a pass up for Elijah Stoneburner in the end zone, but it was overthrown and tipped by Parker Szlanfucht on the final play of the contest.