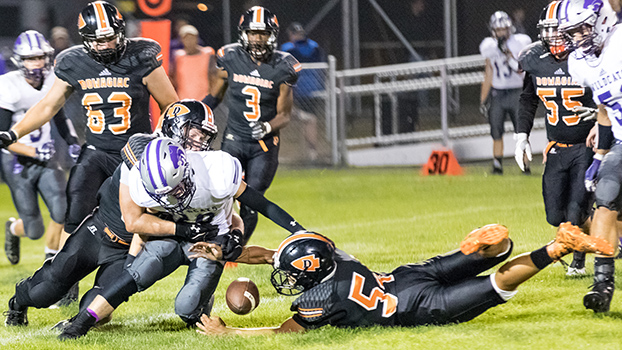 Dowagiac’s defense was up to the challenge of the coaching staff as it shut down Three Rivers Thursday night. (Leader photo/TIMOTHY RITTER)

DOWAGIAC — After giving up 21 points to Vicksburg in the fourth quarter last Thursday night, Dowagiac Coach Mike Stanger said his team came in with chips on their shoulders.

“We didn’t finish last week’s game and we didn’t play good,” Stanger said. “The game film was hard to watch and this week we had to focus on the little things. We also challenged our defense this week.”

And focus they did as the Chieftains leveled their early season record at 1-1 with a 21-7 win over the visiting Three Rivers Wildcats.

The feisty Dowagiac defense limited the Wildcats to 21 yards of total first-quarter offense compared to the Chiefs 82 yards.

In the second quarter, it was much of the same as the Wildcats could only muster a minimal six total yards of offense.

“Our defense was a standout tonight,” Stanger said. “Our corners played well and we rotated our defensive ends throughout the game.”

With the defense accepting the challenge put to it by the coaching staff throughout the week, it was the offense’s turn to create more first downs and limit the amount of three-and-outs.  Dowagiac did so by getting eight first downs in the opening half and having just one three-and-out before turning the ball over on downs.

Junior Duan Simpson (44 yards on 10 carries) opened the scoring for the Chieftains in the second quarter on a 10-yard run at the 9:46 mark. Simpson capped off an eight play, 66-yard drive with the score.

Dowagiac forced a three-and-out on the next Wildcat possession

Aided by unsportsmanlike conduct (hit to the head) and defensive holding penalties, Dowagiac went 74 yards in 11 plays and led at halftime 14-0.

Senior Caleb Murphy (26 rushing yards, 16 receiving yards, and three passing yards) punched it in on a fourth-and-goal with 2:32 left in the half.

Dowagiac received the second-half kickoff, but was forced to turn the ball over on downs, even with the help of an Ellijah Williams 46-yard reception.

Another three-and-out by the Three Rivers offense, and good Dowagiac field position, seemed like another Chieftain score was near, but a personal facemask penalty caused a fourth-down conversion too far gone and the Chiefs had to give the ball up again.

Three Rivers fumbled on its next two possessions.

Dowagiac’s Murphy and Donovan Sullivan recovered the fumbles, which led to senior Shiquan White (76 yards on eight carries) breaking free from 39 yards out and extending the lead to 21-0.

The Wildcats fumbled two more times in the fourth-quarter (Dowagiac recoveries to Dylan Hill and JJ Smith) and finally put up points on a 5-yard pass with 3:58 left in the game.

Chieftains senior quarterback Brenden Dudley went 10-of-20 for 130 yards and a pair of interceptions. He also ran for nine yards on six carries.

Dowagiac turns in best day on the links so far

PLAINWELL — It was doubleheader day for the Wolverine Conference as the league schools headed to Lake Doster for 18... read more