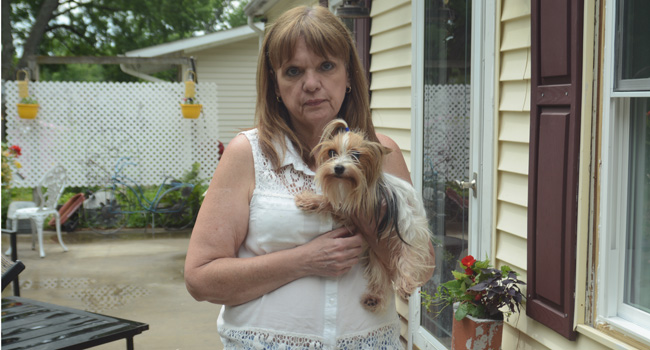 As Michigan lawmakers reassess the state’s stance on medical marijuana, Leader Publications takes a closer look at GROWING AN INDUSTRY.

Kim Waldrop, of Niles Township, can recall the night nearly six years ago when pain from her multiple sclerosis left her at her wit’s end.

On the brink of tears, Waldrop called her son, Tommy Billings, who heard the agony in her voice. Not much later, he dropped by her house “with a big old blunt,” advising that she try it to ease her pain.

Waldrop had to be coaxed to try it. To her, medical marijuana had not seemed like an option and like any other drug, she said she feared being addicted.

But that night, circumstances convinced her otherwise, so she took a hit.

“This [marijuana] was my last resort for pain relief and it has been the best,” Waldrop said. “I took two hits and I was pain free for the first time in 10 years.”

As a nurse for Lee Memorial Hospital in Dowagiac for more than 20 years, Waldrop was used to caring for others, but that changed with her 1991 diagnosis of multiple sclerosis.

The disease impacts the immune system, eating away at the protective covering of the nerves. The result is muscle spasms, pain, dizziness and weakness.

“[The] pain runs your life. Just dealing with it makes you an ugly person,” Waldrop said.

Each morning, after a sleeping for three to four hours, Waldrop would face morning muscle spasms. To get around, she often had to use of a cane. There was also the toll of her daily medicine regimen, which required her to take up to 20 medications at a time. Additionally, Waldrop had to receive IV steroid injections five days a week. The injections wreaked havoc on her emotions.

“It made me crazy,” Waldrop said. “It put me on an emotional rollercoaster. I was happy one moment and crying the next.”

She also believes that the steroids may have contributed to a cyst rupture in her brain, shortly after her MS diagnosis in 1991.

The number of prescribed medications also began to have a negative impact on the function of her kidneys and liver.

All of this began to impact her job as a nurse, a career she had dreamed of having since she was a child.

Following her diagnosis with MS, Waldrop also found out she had fibromyalgia, irritable bowel syndrome and glaucoma. Waldrop said she had also struggled with weight and underwent a gastric bypass in 2008.

Throughout the medical treatment process for her illnesses, Waldrop discovered she was allergic to most painkillers.

During a doctor’s appointment one day her physician asked her what she was doing for pain, due to her allergym and asked if Waldrop was a legal medical marijuana user.

Waldrop told her she was not.

Waldrop was issued a medical marijuana card through U Med in Sister Lakes.

To a degree, Waldrop credits the use of medical marijuana with helping to get her life back.

She is back to work as a volunteer at AmVets, where she helps to pick up food deliveries. In her spare time, Waldrop creates dog-carrying bags that she sells on the side.

First thing in the morning, Waldrop starts her routine off by eating some medical marijuana infused coconut oil, which helps to control body spasms, most typically in her legs.

While getting high from marijuana is obviously a side effect, Waldrop said she does not enjoy the feeling. To counteract this, she uses strains of marijuana that are higher in canibadiol (CBD) and lower in THC . CBD is a chemical compound found in marijuana that has no psychoactive effect, as opposed to euphoric/intoxicating effects, which THC can cause. The use of CBDs has been credited for stopping seizures, according to drugabuse.gov.

At night, Waldrop eats a marijuana-infused chocolate and smokes a vaporizer, which helps her sleep.

“Now I average between four and eight hours of sleep,” Waldrop said.

Waldrop also made some changes to her diet and lifestyle to improve her health. She began eating healthier, too.

Of course, no medicine comes without some side effects.

Waldrop said the most negative impact from using medical marijuana is the “couch lock syndrome,” where if she uses too much, she does not want to do anything.

Waldrop said she used to be apprehensive about what people would think of her if they knew she was a medical marijuana user, but after nearly six years of using the substance to treat her pain, Waldrop advises those who oppose the drug to do their research or talk to someone like her.

“I am all about educating anyone who is willing to hear it,” Waldrop said.

Waldrop’s desire is not just to change people’s minds, but rather to make people see the face of the medical marijuana user as a human being: the parent with cancer, the grandma with chronic pain and so many others.

“It is really hard to know that there are people out there suffering,” Waldrop said. “Maybe dying and we are not able to help, and there is not help available because they do not have the access.”

Invasive species programs to be hosted with statewide event