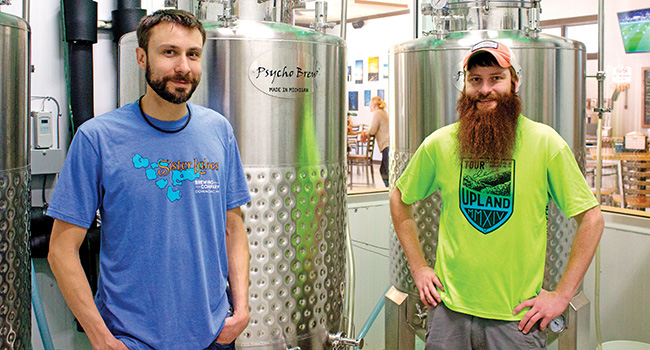 With Memorial Day — the unofficial start of summer — right around the corner, the staff of Sister Lakes Brewing Company are inviting the community to check out what is new on tap.

The local microbrewery, located at 92500 C.R. 690 (Sister Lakes Road), is hosting a summer beer release party from 6 to 11 p.m. Friday. Customers will have a chance to enjoy some of the new beer the business has brewed for the season, as well listen to some live music: Don’t Call Me Betty, a 1980s/1990s rock cover band.

Sister Lakes Brewing Company — owned and operated by brothers Brian, David and Joe Morin, along with their father Jerry — will be reintroducing several fan favorites from when the business opened its doors for the first time in June 2016. The staff will also be putting some new summery creations on tap as well.

In the process, the owners will take several heavier, darker beers, including its porter and black IPA, out of the rotation during the warmer and sunnier months ahead.

“Beer is very seasonal,” Brian said. “While we are firm believers that you can enjoy any kind of beer any time of the year, people tend to drink certain brews at different times of the year.”

Returning to the menu will be SLBC’s “Noon Whistle” Session IPA and its “THE RANDY” shandy, which is an IPA mixed with grapefruit juice. The two were among the most popular items on the beer list last year, Brian said.

New for the season will be an American wheat beer, called “The Driftwood,” in honor of the venerable Sister Lakes ice cream parlor located just a few blocks down from the brewery.

“It’s a very light drinking summer beer,” Brian said about the new drink. “It’s something you would want to drink during a day out on the lake or the golf course.”

The crew has spent the last several weeks brewing up the new beer on the premises.

“The beer is kegged and ready to go,” David said. “We’re just waiting for Friday.”

Besides knocking back a few at the brewery’s bar or tables, visitors are welcome to take some of the new beers to go once they make their debut this week. The brewery has recently begun canning its beer, selling them in four packs for customers to take with them on the go.