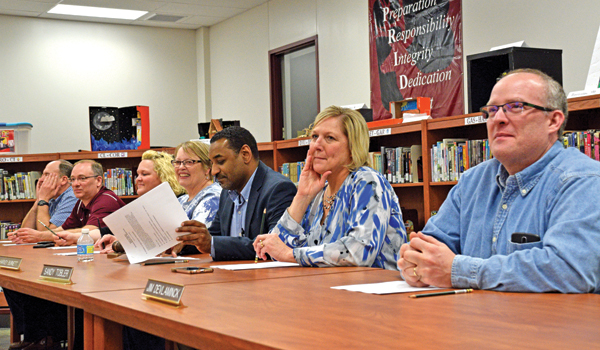 After a day full of meetings with the Buchanan board of education on Tuesday, superintendent candidate Tim Donahue was all smiles at the evening’s meet and greet with the public.

During a special meeting of the board, after the meet and greet session, the board unanimously voted to offer Donahue the position of superintendent at Buchanan Community Schools.

Gary Rider, the consultant with the Michigan Leadership Institute who has been aiding the search, debriefed the board prior to its vote in order to hear any questions, concerns or comments the board had about Donahue.

The board gave glowing remarks about the candidate and was hopeful he will continue to lead the district in the positive direction it has been headed.

“Dr. Andrea [van der Laan] has done a lot over the last seven years of putting us on a path, from an academic standpoint,” said board treasurer James DeVlaminck. “I think with his [Donahue] background, we ought to be able to take that and continue to move forward, and not backward.”

Moreover, the board felt a connection to Donahue and believed that he intends to work closely with them as a team.

“I think one of the biggest qualities that he will bring [to the district], is through his personability,” said board president Dr. Harvey Burnett. “I think he’ll be a protector of our staff and students, and look out for parents. I think that’s going to be very important for us as we move on and establish new goals.”

Rider called Donahue and put him on speakerphone for the entire audience to hear.

“You might wanna pull over for this,” Burnett said to Donahue, eliciting laughter from the audience of about 30 community members. “I’d like to, on behalf of the board, welcome you as our new superintendent.”

“That’s fantastic!” he said. “I saw so many people dedicated to kids and that’s where my heart is as an educator. I know we have a few pieces to work on as we move forward, but I can see your success now and I think I can contribute to that. I feel like it’s the right fit. I accept.”

The audience responded with applause and cheers.

Prior to Tuesday’s meeting, a second finalist, Ryan Sines, withdrew his name from the running, leaving Donahue as the lone candidate.

After Sines’ withdrawal, Rider took a look at the feedback sheets provided by the public after the first round of interviews and found that no one in attendance had any questions or concerns about Donahue.

A community member previously raised a question about re-opening the interview process to look for more candidates to compare Donahue to after Sines’ withdrawal, but Rider explained that that would only be an option if the board rejected Donahue as a candidate.

The board weighed Donahue against the superintendent profile they crafted, alongside the community, and found him to be a good fit for what they are looking for in a superintendent, negating the need to begin a new search.

Donahue currently serves as superintendent at Potterville Public Schools — where he has been for the past seven years — and has served as a high school principal at Potterville.

The personnel committee of the board of education will meet with Donahue within the next week to begin discussion on a contract.