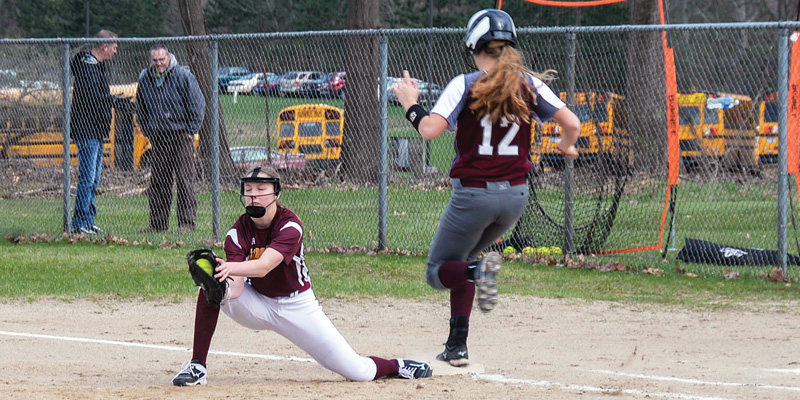 Brandywine first baseman Nicole Sachman stretches to get the out against Watervliet Tuesday. The Bobcats were swept by the Panthers 13-1 and 10-2. (Leader photo/ERIKA PICKLES)

Brandywine’s varsity softball team has a lot of work on the horizon.

The Lady Cats hosted Watervliet Tuesday evening for its first conference double-header of the season, where they learned first-hand just how tough a veteran BCS team can be.

The first game ended in five innings, when the Panthers exceeded the 10-run rule limit with a 13-1 victory. In game two, Watervliet sailed to a 10-2 win.

One of the most recognized and winningest head coaches in Brandywine’s history, Jim Myers, returned this year after a nine-year break from the coaching scene. Myers had previously coached several successful Lady Cats squads during his 17 years with Brandywine, racking up more than a handful of district and regional titles, two state-runner-up achievements and one state title.

Myers said those accomplishments take a lot of hard work, dedication and commitment, and require one key ingredient; exceptional defense. Something his current team is lacking.

“We have to keep working on our defense and we’ve got to be better at it, because without our defense, we will have a hard time competing, especially against veteran teams like Watervliet,” Myers said.

The Bobcats, now 0-2, will face Cassopolis Thursday evening for another conference game at home. First pitch is set for 4:15 p.m.

The Buchanan softball team was swept in a pair of non-conference games by visiting Coloma Tuesday.

Skylar Crisenbery and Jaidyn Hutsell combined to toss a five-hitter in the first game.

The Comets used a six-run seventh inning to rally from a 4-3 deficit.

Morgan Wagner and Alyssa Dillenbeck both homered for Coloma.

Kaitlyn Lukkarila, Alyssa Florey and Jayla Bibbs all doubled for the Bucks.

In the nightcap, a seven-run third inning broke open the game for the Comets.

Sammi Luzadre and Erica Donathen both doubled for the Bucks, who hosted Niles in a non-league doubleheader Wednesday.