The Orphan Train and The Grand Old City 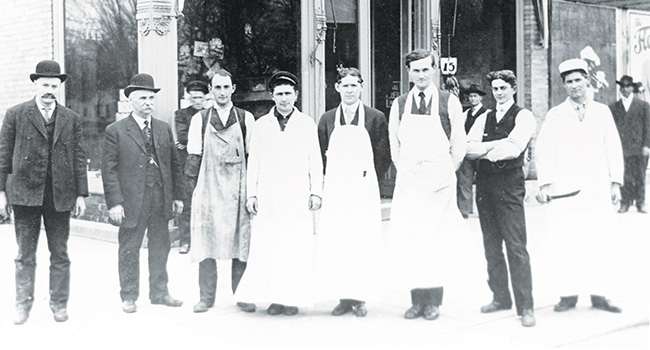 The Orphan Train and Dowagiac’s connection to it will be fully explored in 2017, through a series of projects being undertaken by the museum, the City of Dowagiac, the Beckwith Theater Company, artist Ruth Andrews, Dogwood Fine Arts Festival, Connie Gray of Looking Glass and many community members. We are all excited about what we have planned for the community.

Upcoming events include a Riders Reunion in September, a Youth Voices event during Dogwood and the Beckwith Theater Company is planning on doing an Orphan Train production in the summer.

Ruth Andrews has been busy designing a mural depicting the Orphan Train that will be painted on the post office’s concrete wall on Pennsylvania Avenue throughout the summer.

We will even have a coloring book produced!

The project, called “Starting a New Life: Dowagiac’s Orphan Train Story,” is made possible by a grant from the Michigan Humanities Council, an affiliate of the National Endowment for the Humanities. We have also raised more than $4,500 from community members, including a substantial donation in memory of Karen Pugh. Thanks to all who contributed.

The Orphan Train has sometimes been a bit romanticized, promoting the idea that all these poor kids from cities along the Eastern seaboard were saved and led idyllic lives on farms in rural America.

The truth is more complex and lies somewhere short of that picture.

From 1854 to 1929, Orphan Trains run by the Children’s Aid Society and similar organizations placed out 250,000 children to almost every state in the continental U.S. The general procedure was for the organization to send notice to a town that it selected for a mission, encouraging families to select children who could help them with chores on the farm or in the house.

The goal was not adoption and the relationship was referred to as employer and employee. Families had basic background checks done prior to the selection process — referrals from pastors and community members could suffice.

Some of the children had positive experiences with families that took them in and eventually adopted them. There are many success stories, including some orphans that went on to be governors, senators and business owners.

George Moore was taken in by a family in Silver Creek Township in the 1860s and he went on to run a mill and eventually open a grocery store at the corner of Main and Front Streets in Dowagiac. In fact, he had the building that houses D&R Sports built for his market.

Other children had dramatically different experiences. Some orphans were abused by their new families, forced to perform hard chores with little appreciation for their efforts and were never welcomed into the families.

Some of the children ran away from the new families or had to be placed with new ones.

Today, we can look at the Orphan Train and be aghast at the concept. Children paraded off a train to be inspected by area farm families to see if they could take them in to help with chores.

It was, however, better than what faced orphans on the streets of New York City in 1850 and it opened the door to reforming the orphanage system and how society treats orphans. It certainly influenced child welfare in the 20th Century.

So, what was Dowagiac’s connection to the Orphan Train? In late September 1854, Dowagiac was the destination of the first Orphan Train. The Children’s Aid Society sent 46 boys and girls, most between the ages of 10 to 12 years old, on two boat rides and two train trips from New York City to Dowagiac.

The orphans arrived in Dowagiac around 3 a.m. and slept around the depot. They then explored the countryside and found apples, nuts and other local produce.

They then went to the schoolhouse/church at the corner of New York and Commercial streets to meet the local residents.

They spent the next night at the American House Hotel and returned to the schoolhouse/church the next day to be selected by area families. By the end of the week, most of the 46 children had been taken in by local families and the first Orphan Train was deemed a success.

The Children’s Aid Society ran the Orphan Train for 75 years because of its success in Dowagiac.

The question, “Why Dowagiac?” persisted for decades.

The chaperone on the first trip repeatedly referred to a “Reverend O,” making advance plans in Dowagiac. A researcher going through Charles Loring Brace’s records (the founder of the Children’s Aid Society) found a childhood friend named Olmstead and Cassopolis had a pastor at that time named Clark Olmstead, who was from Brace’s hometown in Connecticut.

It is likely that this is the connection that made Dowagiac the first stop (Dowagiac was the nearest railroad stop at that time).

I will likely write more on the Orphan Train in the coming months as we move forward with this project.

We hope to see you at events and maybe at the mural site helping Ruth paint.

Steve Arseneau is the director of the Dowagiac Area History Museum. He resides in Niles with his wife, Christina, and children, Theodore and Eleanor.

The, as yet, unfinished history of politics