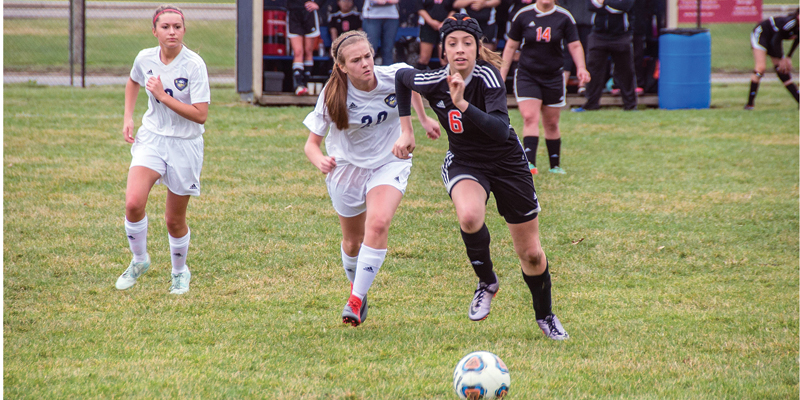 Despite a 4-1 loss in its season opener against Niles, first-year Dowagiac coach Chad Davis couldn’t be more proud of his soccer team.

Davis admitted he still has some work ahead, but was more than impressed with his team’s performance in the first match of the season, especially considering some of his players have never played soccer before.

“I threw these girls into positions they have never played before, with some girls never playing this sport at all,” he said. “This season has already been one of firsts for a lot of us, so we’ve already had to put in a lot of hard work. Given that, I thought they did a great job of helping each other out and I was so proud of the effort they gave tonight against a tough Niles team.”

The Vikings took a 2-1 lead into halftime and carried their offensive momentum into the second half, scoring two more goals.

Sophomore Ashley Thompson led the way for the Lady Vikes, scoring a pair goals. Miya Steele and Grace Florkowski added one goal each for Niles.

“We were a second half team tonight,” said Niles coach Katie Czirr. “We unfortunately came out a little flat in the first half, but we picked it up when we needed to in the second and I thought the girls did great for the first game of the year.”

Entering the season, Czirr said the main goal for her Vikings is to be a tough competitor in the SMAC conference.

“Half of the teams we play are top 10 in the state, which is an honor, but we really have to come out strong,” she said. “We’re making baby steps to get where we need to be and we’re going to keep pushing forward as tough as we can.”

For Dowagiac, Davis said he has no choice but to hit the ground running.

“We have some very tough teams on our schedule this year and we have no choice but to come out and be ready to roll every single week,” Davis said. “We have a lot of work to do still to get to the level of play that a lot of the teams in our conference are on, but this is a very tight group of girls. And I have no doubt that they will guide each other and help each other out.”

Dowagiac’s loan goal on the night came from Kellyn Daly.