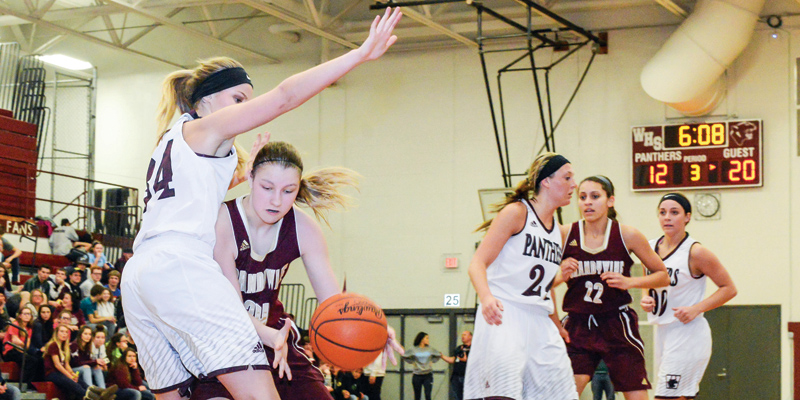 The Bobcats overwhelmed tournament host Watervliet with a non-stop pressure defense, which allowed them to secure a 40-26 win to advance to Wednesday’s semifinal game.

Panther head coach Jason Forrester said Brandywine’s defense was unlike anything his team had seen all season.

“We tried to prepare for that pressure, but it’s hard to simulate it in practice,” he said. “My girls were just exhausted. They ran out of gas. But that’s what coach Hood’s program does to you. He’s been doing this a long time and no matter how much you prepare, it’s tough to beat.”

A 3-pointer from Mia Stella sent Brandywine on a 6-0 run just 1:14 into the game. During that time, the Bobcats also committed five steals defensively, which assisted in lead. Brandywine held a 12-7 advantage entering the second period.

The Bobcats’ full-court, man-to-man defense got Watervliet into foul trouble early. Brandywine was put on the free throw line for its first one-and-one just two minutes into the second quarter.

Thankfully the Lady Cats had stellar defense, because their offense – mostly free throw shooting — was off. Brandywine only went 2-for-11 from the line in the first half, something head coach Josh Hood was aware of, and acknowledged his team has struggled with. On the night, the Bobcats were just 38 percent from the field.

“We haven’t been pretty on offense this season. It’s been a struggle, especially on that foul line, but that’s where our pressure came into play tonight,” Hood said. “Where we lacked in offense we made up for in defense, and I am so proud of the defensive effort they gave.”

Watervliet came out with a vengeance in the third. The Panthers went on a 9-0 run, cutting the lead to just one point (20-19) four minutes into the quarter.

But the last half of the third went right back to the Bobcats, who not only answered with their own 9-0 run, but added an additional four points on lay-ups from Zakiyyah Abdullah. Brandywine remained ahead, 33-22, when it entered the last eight minutes of the game.

It was evident the Panthers were tired in the fourth quarter.

Watervliet was only able to add four additional points to its final score, while Abdullah, Stella and Nicole Stachman combined for seven points for Brandywine, which sealed the deal for the Lady Cats.

Abdullah had a game-high 14 points for the Bobcats, who are now 17-4 overall.
Hood’s excitement and pleasure with his squad shined at the end of the game.

“You don’t see very often a team as young as we are, who had so many doubts this year, come into the house of a 16-4 conference champion team and play as well as our girls did tonight,” Hood said.

“In my eight years at Brandywine, there’s been a lot of exciting games and a lot of excited locker rooms, but this is right up there with one of the proudest I’ve been after a victory. I am super proud of the Lady ‘Cats tonight.”

Brandywine will face Bridgman at 7:45 p.m. today at Watervliet.