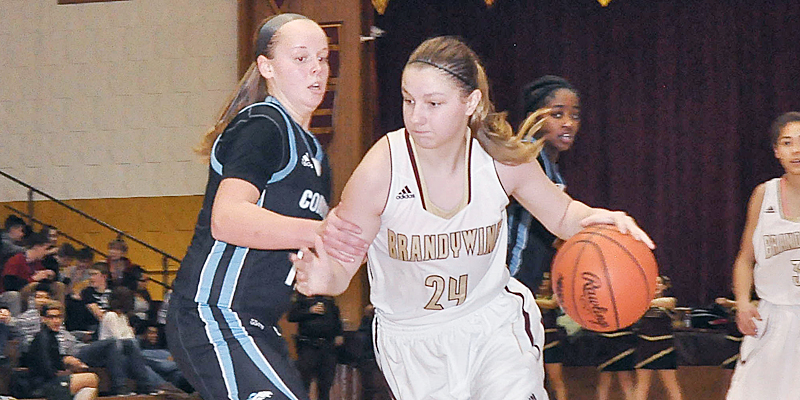 Brandywine’s Nichole Sachman drives around a Comstock player in the Bobcats’ loss to the Colts Thursday night. (Leader photo/ERIKA PICKLES)

For the second time this season, the Comstock girls’ basketball team defeated Brandywine.

The final score almost a duplicate of the Dec. 2 match-up between the two teams, where Comstock won, 47-38.

In Thursday’s game, Brandywine simply wasn’t prepared, according to head coach Josh Hood, who said it was a rough week for his team.

On Monday and Tuesday, Hood said he released the Bobcats early from practice due to performance issues, which he described as “mediocre, at best.”

“We had four days to execute and we didn’t at all. I hope the girls understand that you’re not going to have the results you want when you play and prepare mediocre. This week, we did not prepare well,” Hood said.

The game was opened with a 3-pointer from the Colts’ Caylin Lopez. A key outside shooter for Comstock who is notorious for scoring in double-digits, was held to nine points on the night. Brandywine’s Zakiyyah Abdullah scored four of her team-high 16 points in the first period, but the Lady Cats trailed 8-6 after the first eight minutes of play.
Mia Stella helped Brandywine quickly take the lead in the second quarter, sinking two 3-pointers for the Bobcats. Megan Schmidt also hit a 3-point shot late in the period to help give Brandywine a 19-16 lead entering halftime.

The second half started the same as the game opened — with a 3-point bucket from Comstock. This one coming from Daisy Ansel, who scored a game-high 20 points for the Colts. The bucket tied the game at 19, and eventually assisted Comstock in regaining the lead. With 3:21 left to play in the third, Comstock had a 29-23 lead over Brandywine. But Abdullah and Sachman answered back for the Lady Cats, and with a combined nine points, Brandywine carried a 32-31 advantage entering the fourth.

Despite the lead, Hood said his team missed critical buckets in the third, which could have extended the lead even further.

“We didn’t really execute a very good game plan on offense (in the third). We missed layups … two, three four in a row. We can’t miss those shots,” Hood said.
Lopez opened the fourth with a 3-pointer, giving Comstock the lead back — 34-32. It was a lead it never lost control of the remainder of the contest. Although the game stayed within five points for most of the period, the Colts broke away from the Lady Cats with an 8-0 run with just under three minutes left to play, holding a 44-35 lead.

One last 3-pointer from Brandywine’s Kennedy Byrd with just 23 seconds left wasn’t enough to for the Bobcats, who are now 9-3 overall.

“I’m really disappointed in the preparation, but I’m mad at myself for not finding ways to motivate this team right now,” Hood said. “We have a few girls on this team who know what it takes to be a champion, but I’m also not doing my job as a head coach, and I have t6o find ways to get these girls motivated.”
In JV action, Brandywine suffered a 36-28 loss to Comstock. Madison Bailey scored a team-high nine points for the Bobcats.